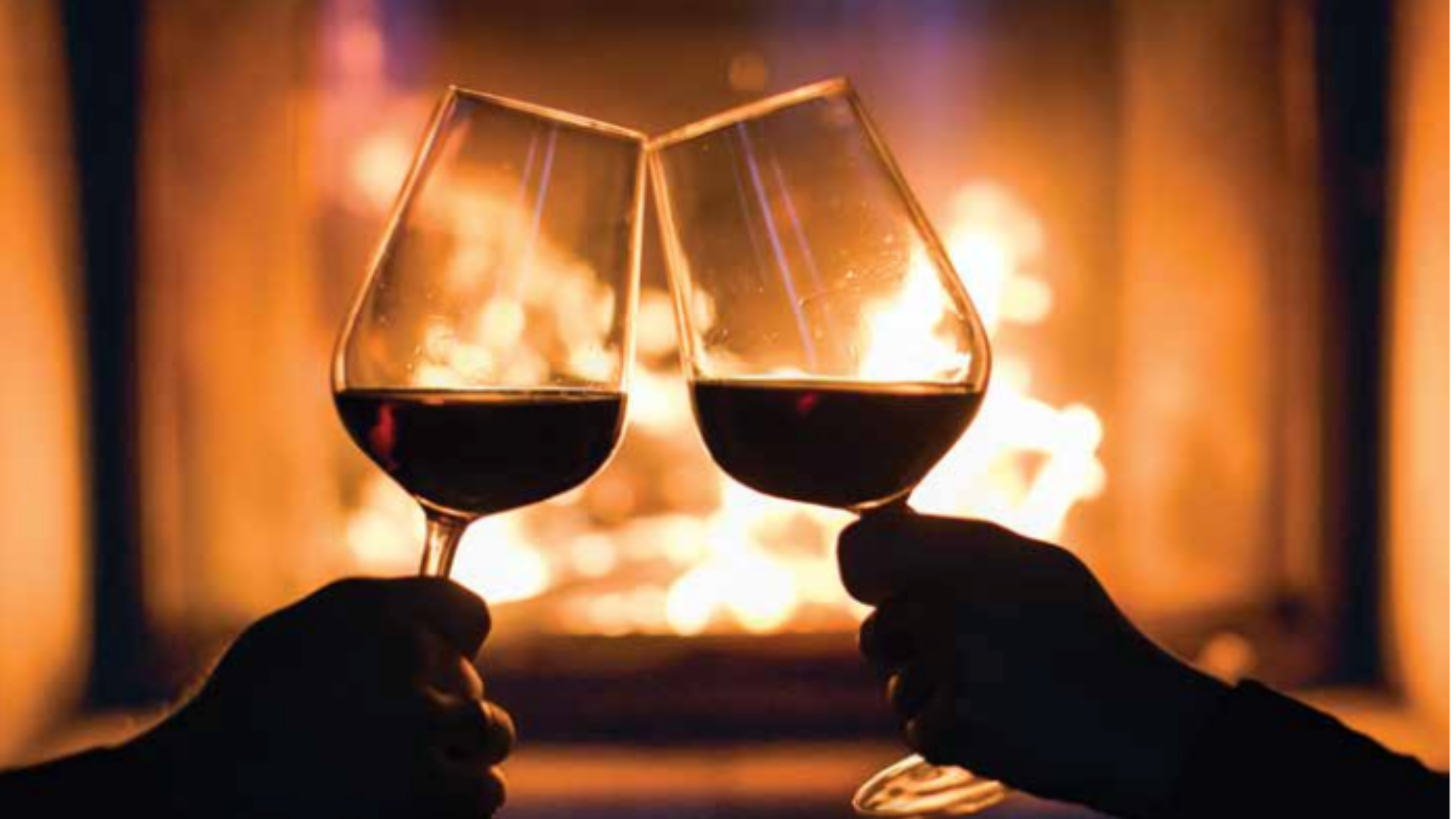 The best wines to pair with hearty wintry fare

Dinner wines are a popular way to complement your meal and its tastes, textures and aromas, or even just to take the chill out of a snowy evening. But the wine you drink in September is not necessarily the wine you should drink in February.

It’s time to put away the grenache rosé, pack up the pinot grigio, and cross cabernet franc off your list. These bottles, and a host of others, are fruitier and lighter blends. They lack the comforting core of heavier winter wines.

We consulted with two local sommeliers and a couple of regular folks who are wine — and food — enthusiasts to provide seasonal suggestions to help you expand your winter wine options.

Krysta Dennis holds a diploma from the Wine and Spirits Education Trust in London, is one of the founding members and sommelier of the Siena College Beverage Institute (SBI),
and is the producer for the Siena Creative Arts Department. She also teaches a Wines of the World class for SBI and supervises student projects with local craft beverage producers.

“If you’re looking for a white wine that is as crisp and clean and bright as freshly fallen snow, try a riesling,” Dennis says. “It’s a very versatile white that’s great with seafood, pork, cheese, and my favorite Thai food.”

Red wines are also popular for their layers of flavor. “I’m looking for a red wine with depth and substance in the winter, something I can sink my teeth into,” Dennis says. “Nebbiolo is a great grape for this time of year. From Piedmont in Northwestern Italy, it comes from the land of truffles and rich stews, and pairs beautifully with those.”

Dominick Purnomo, wine director and co-owner of Yono’s and dp An American Brasserie, grew up in his family’s restaurant working alongside his parents. Upon finishing at Morrisville State University in 2000, Purnomo came back to Albany to work in the family business and took over the day-to-day operations. It was then that he discovered a true passion for wine. He was a national finalist for the Best Young Sommelier Competition and has been nominated for a James Beard Award for his wine program on three occasions.

“Syrah is my favorite varietal for winter meals because of the rusticity of the wines and the foods they lend themselves to,” says Purnomo. “This wine is as at home with a pepper-corn-encrusted steak off the grill as it is with a hearty chili with a good dose of spice.”

He also has a recommendation for wine to pair with pasta, and it might sound familiar, because it was also on Dennis’ list. “Nebbiolo, from the Langhe in Northern Italy is my go-to wine for rich and hearty tomato-based pasta dishes,” Purnomo says. “The wine is delicious in a glass on its own but ethereal when paired with pasta dishes, especially those with a meat sauce.”

Janice and Joe Verrastro of West Sand Lake are vino enthusiasts who appreciate the deep flavors of wines ushered in during the winter. They particularly enjoy shiraz (the Aussie
version of syrah) with its black fruit flavors, as well as Barolo and Montepulciano and sangiovese wines with hearty winter meals that typically include meat and potatoes.One of their favorites pairs nicely with most cuisines. “We always have a good port on hand,”  Janice Verrastro says. 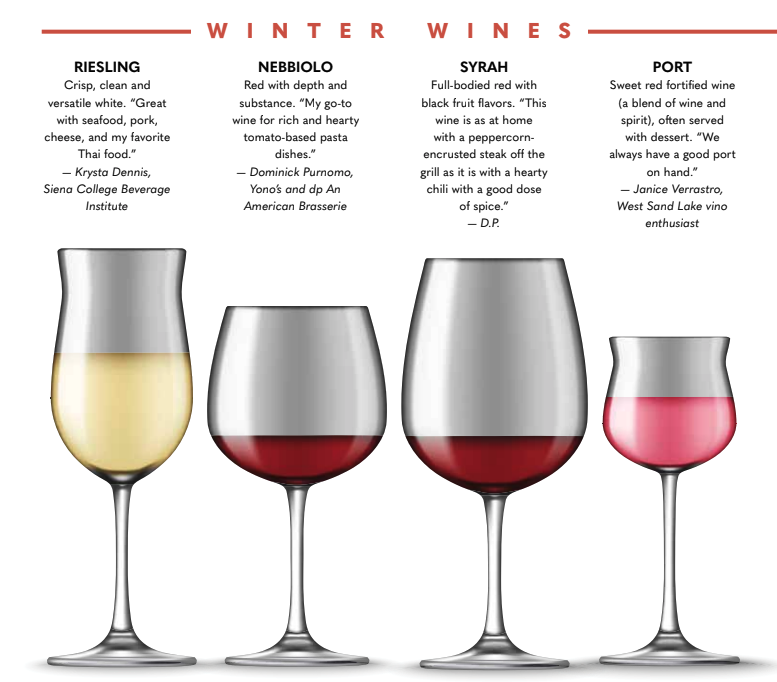 Daniel Cravenof Delmar is a self-confessed foodie who is always thoughtful about the wine he is pairing with his masterpiece meals. “If I’m making something with bold flavors such as steak, I like a richer red blend like cabernet sauvignon,” Craven says. “Red blends are hard to go wrong with when they’re alongside lots of strong tastes.”

The New Year is already here, but if your midnight toast didn’t satisfy your thirst for the bubbly, go ahead and pop a bottle any- time this winter. “While many people only think of Champagne for New Year’s Eve and special occasions, I personally enjoy Champagne as frequently as possible,” says Purnomo, who recommends Champagne Le Mesnil Blanc de Blancs Grand Cru.

“The high acidity levels lend this wine to pairing with just about any food imaginable,” Purnomo says.“It makes each moment more celebratory, and is also perfect to enjoy as anaperitif while you’re cooking those hearty winter meals.” 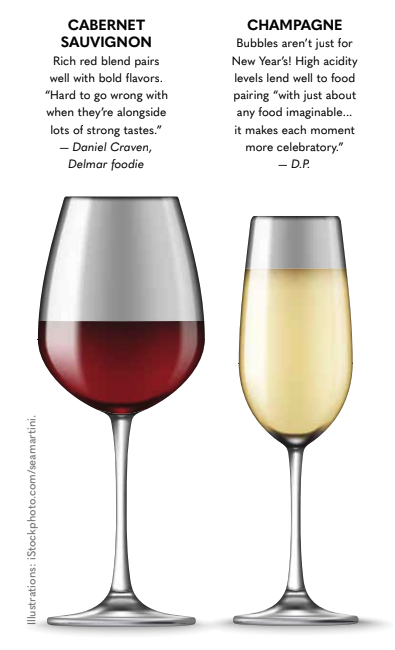