Part Three of our holiday movie guide had to be about the book that started it all: Charles Dickens’ A Christmas Carol. Because is it really Christmas if we haven’t watched a grown man dance through the streets in a nightgown, yelling, “I’m as giddy as a schoolboy?”

The movie gets its own category because as hard as we tried, we couldn’t recommend just one version of this classic Dickens tale. There have been countless iterations—too many to summarize here—and despite some seemingly wild aberrations, the value of the tale all seems to come down to the charisma of the lead actor. Any way you prefer it, though, the story is the same: Old miser Ebenezer Scrooge is visited by three spirits of Christmas who are determined to show him his wrongful ways, and he awakens a new man filled with the Christmas spirit. And before anyone gets upset: we are listing these chronologically, not in order of preference.

This early edition is a fan favorite. The tagline when it was released was “Greater than David Copperfield!” which is… special. But the graphic effects were really incredible considering this film was released before computers were even a thing (although they couldn’t do much to make Tiny Tim less smarmy. Yikes). Owen’s scowl has no match on the modern screen, which makes his transformation into a “giddy schoolboy” equal parts hilarious and disturbing.

1951 – Alastair Sim is another contender for favorite Ebenezer portrayal with a face only a mother could love. This version does an excellent job of presenting Scrooge’s past in a linear fashion, making his descent into miser-dom more plausible than in some other films. In addition, the art direction results in an almost Shakespearean adaptation, with many parts hauntingly spooky and dark. This plays nicely into Scrooge’s transformation on Christmas morning, when Sim’s comedic background is finally allowed to emerge. 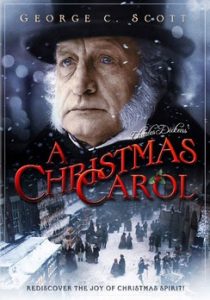 1984 – George C. Scott plays a formidable Scrooge, although we still insist his ferocious lambchops should have been given separate billing. Facial hair aside, many contend that this made-for-TV version is the absolute quintessential Christmas Carol, with a superb cast and a director who was out to refresh this classic into something painfully honest yet magical. 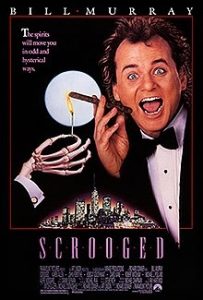 1988 – Scrooged — This film starring Bill Murray is one of the best versions yet, and yes, we choose to die on that hill. Sure, the acting pales in comparison to someone like George C. Scott, but it doesn’t try to live up to that standard. Instead, it updates the story to a more modern era, and features cameos of some truly hilarious comedians while still delivering the message of generosity and goodwill. And seeing as it was set in the ’80s—a time of farcical commercialism and greed—the moral of the story is pretty apropo. 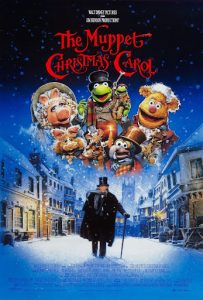 1992 – The Muppet Christmas Carol — “This version is great for introducing the story to the kids,” (she said as she turned it on for her umpteenth viewing, no children present at the time). Seriously, though, who doesn’t love the muppets? And watching Michael Caine — sorry, Academy Award winner Michael Caine — act alongside our most beloved muppets is enough to make our hearts grow three sizes. Plus, the movie has some pretty catchy tunes. 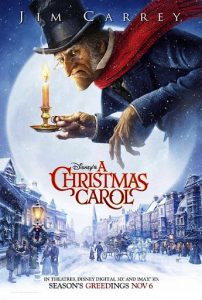 2009 Jim Carrey — Bear with us on this one, folks. When you have so many utterly classic takes on a story it can be hard to adapt to new mediums, and then when you see that Jim Carrey plays Ebenezer Scrooge it would be all too easy to dismiss this recent animated addition to the canon. However, Carrey does an admirable job of reining in his inner clown and gives an honest portrayal that lends itself to the animation readily. Our advice is to give it a chance before you give it a bah-humbug.

There you have it. We have assembled the best holiday films to watch as families gather into one home to celebrate the season. And before you start shouting “But what about…?” at the screen, we know there are also many movies that are what we will call “holiday-adjacent;” they feature the holidays as a setting but fall under a kind of genre limbo where their credentials as “Christmas Movies” spurs debate amongst fans. Die Hard, Gremlins, Trading Places, and a few of the Harry Potter films all get people pretty heated, and that’s why we’ll have to cover those another time. Meanwhile, happy viewing.

Pros and Cons of Cable. Should You Cut the Cord?