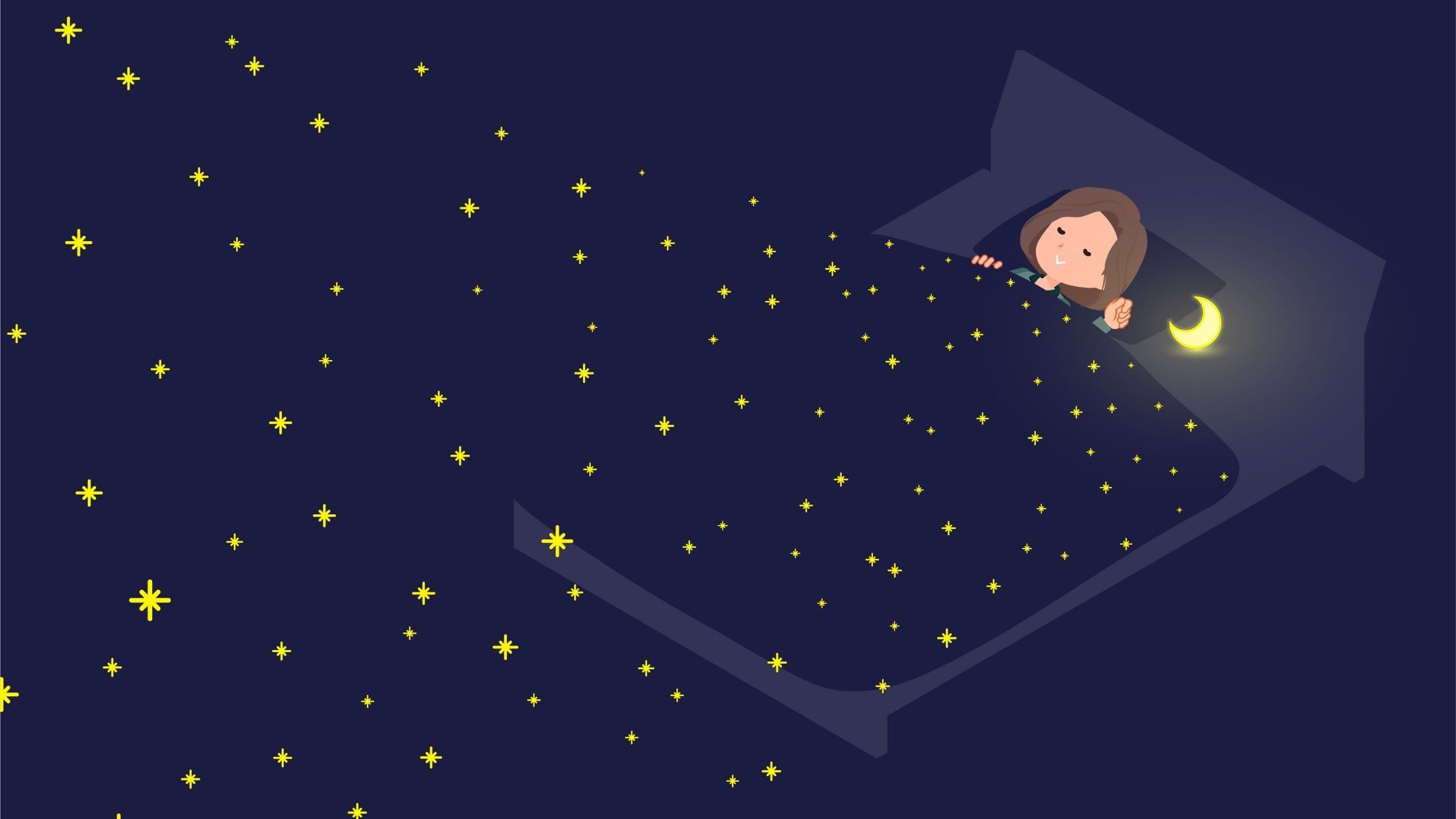 “Age 50 years seems to be a critical turning point in the human life for sleep,” the study’s authors write. That’s the age when the circadian rhythm, which controls the chemicals that make us feel alert or drowsy throughout the day, starts to shift.

Dr. Harold Sokol is a pulmonologist and critical care physician who treats patients at St. Peter’s Sleep Center in Troy. He says it’s not normal to sleep all night in adulthood without waking up.

“The only people I know who do that are either lying, on drugs, or in a coma,” Sokol says. “No one else does. No one.”

Still, it’s hard not to get increasingly concerned about lack of sleep since habitually short sleep times have been connected to a number of health challenges, including cardiovascular, neurological, and psychiatric disorders. And researchers think that certain sleep processes are critical to learning memory.

Dr. Boris Medarov has spent his career becoming a sleep expert. As the medical director of Albany Medical Center’s Sleep Clinic, and an associate professor of medicine with the division of Pulmonary Critical Care and Sleep Medicine at Albany Medical College, he says sleep is still an area where little is known.

“Even today, in the 21st century, we know awfully little about sleep,” Medarov says. “We know what happens if you don’t sleep, but how exactly sleep contributes to our health, why we have different types of sleep, why we dream, those remain unanswered questions that continue to preoccupy our minds.”

Even so, he says, sleep is absolutely critical for all kinds of well-being. And its absence is associated with all kinds of ills, from high blood pressure and insulin resistance to increased likelihood of being involved in a car accident.

“We all feel miserable when we don’t get enough sleep,” he says. “Good sleep is essential for our quality of life, and for our health.”

If you’re struggling with insomnia, Sokol recommends resetting your habits by aiming for six hours of sleep at night and not taking naps. Since most adults need about seven hours, he says, this will make you feel tired pretty quickly — and that’s the whole point. This trick is called sleep restriction, and it helps people consolidate their sleep into healthy nighttime hours.

Once you’ve established a healthier rhythm, Sokol says, you can increase your sleep time to a healthy seven or eight hours. At this point, it’s time to give yourself a bedtime and stick to it — that means on the weekends, too.

These simple adjustments may drastically improve your sleep. But if you’re still feeling fatigued, don’t worry — you’re not doomed to a life of drowsiness. Addressing some of the most common interruptions that might cause you to lie awake at night is within your grasp. Here are some common issues and tips from the experts.

Older bodies produce less of a chemical called antidiuretic hormone, which prevents people from waking up to use the bathroom.

“When you’re younger, you produce a lot of it, and that’s why you don’t have to urinate in the middle of the night,” Sokol says. In short, midnight trips to the toilet can’t necessarily be avoided outside of common-sense measures like drinking less water before bedtime.

The problem comes when patients let this normal sign of aging create anxiety, preventing them from going back to sleep. “It’s not a big deal; it’s not because you’re falling apart,” he says.

That said, changes in balance and bone density are equally normal parts of getting older, so make sure your path to the bathroom is clear of obstructions and reasonably well-lit for safety. The last thing anyone wants is a late-night injury from falling.

“Everybody’s aches and pains increase as we grow older, whether they admit it or not,” Sokol says. From arthritis to chronic illness, it’s important to deal with discomfort that can disrupt rest.

Taking pain medication before bed can be one solution. Certain pain medications can be risky, however, especially sleeping pills and opiates, which Sokol says he almost never prescribes because they can be habit-forming and have serious side effects. With cannabis products becoming legal on the state level, he says some of his patients have also used THC for pain relief.

Especially in cases where cannabis products can take the place of other medications with known risks, he says, “I’m certainly willing to keep an open mind.”

One of the surest and most scientifically-backed ways to improve your sleep is to cut out the nightcap. While alcohol may help you feel sleepy, it doesn’t keep you asleep. In fact, it prevents your brain from entering healing REM sleep cycles.

“Whatever sleep you have is full of bad dreams,” Sokol says. “Alcohol is not a good thing for sleep.”

And while you’re at it, you might want to nix the after-dinner cup of coffee, too. Even decaf coffee contains some caffeine, so consider a switch to calming herbal tea after lunchtime.

If feelings of fatigue are so persistent that they’re preventing you from doing things you enjoy, something more could be at play. In this case, don’t hesitate to make an appointment with your doctor. In particular, one sleep-related condition becomes much more common around age 50: Obstructive Sleep Apnea, or OSA.

OSA is a disorder that causes people to stop breathing while they’re asleep, sometimes as many as a hundred times over the course of an hour. Sleep apnea has serious consequences: It can exacerbate existing health conditions, raise your risk for certain kinds of dementia, and severely lower your quality of life.

Casey Toomajian, CEO of Hometown Healthcare, says he’s seen so many weary people walk through his office doors that he can practically read the sleepless nights written in the lines on their faces. His company supplies Positive Airway Pressure (PAP) machines, which treat OSA by helping people breathe normally during sleep. Hometown Healthcare also educates people and remotely monitors their usage of the machines.

The good news is once the condition has been diagnosed by a doctor, studies show that people who consistently use these machines to help them breathe are much healthier than their peers who don’t get treatment. A 2021 Oxford University study, for instance, showed that patients 65 and older who used their PAP machines reduced their risk for Alzheimer’s disease.

Toomajian says he’s seen the proof himself. He makes a point of sharing success stories with everyone in the company. Most recently, he recalls a musician who was so exhausted he could no longer play the drums. But after he began treatment for his OSA, he returned to making music.

“People feel like they have a new lease on life,” Toomajian says. “It’s pretty cool to hear the stories. It’s a feel-good business.”

How to pick the right one for you

While doctors and researchers chase down answers to questions of sleep, app developers are happy to offer their own solutions — often for a monthly fee. But which, if any, can actually help?

“Be wary of any app that says it can measure your sleep,” warns Dr. Boris Medarov of Albany Medical Center. “A phone or similar device has no way of knowing if you’re asleep, let alone if you’re in deep sleep … the only thing a device, your phone, may know is if you’re moving or not.”

However, he says, apps that play calming sounds, stories, or meditation tracks can be helpful if you enjoy them.

Dr. Harold Sokol of St. Peter’s Sleep Center says his patients have shown him many apps but he only keeps one on his own phone to show them. It’s called CBT-i Coach, and it uses cognitive behavioral therapy to help treat insomnia. The app is not for profit and is written by Stanford researchers, who run one of the largest sleep centers in the U.S.

Here are some apps for sleep that come highly recommended by sleepfoundation.org, a media company that uses a medical and scientific advisory board to vet the sleep advice they publish.

Sleep routines to help you catch some ZZZ’s

Healthy sleep starts long before we go to bed, and it requires commitment, according to Albany Med’s Dr. Medarov.

“They are simple rules, they are not difficult to do for the first night, second night, but it requires real motivation and some degree of devotion,” he says. “On the other hand, those rules tend to be effective.”

If you can’t fall asleep within 15-20 minutes and find yourself becoming frustrated, Medarov recommends leaving the bedroom and doing something calming. This prevents your brain from connecting your sleeping space with feelings of anxiety. He suggests relaxing activities like TV, reading, or knitting. Then, once you start to feel sleepy, you can go back to bed.

While the research on the effectiveness of cannabis as a sleep aid is scant, using cannabis to fall asleep and stay asleep is popular.

People turn to two main types of cannabis products for sleep: CBD and THC. The more thoroughly studied chemical THC is the active ingredient that creates feelings of euphoria and produces a high. On the other hand, CBD is a milder chemical that some people say helps them feel calm and sleepy.

As people begin to navigate the world of cannabis products, they turn to people like Robert Cohen, general manager at Kapha Cannabis, a dispensary in Lenox, Massachusetts. He says sleep and pain relief are the two most common reasons people ask for his advice.

“There are strains of cannabis that lend themselves to a relaxing, sleepy experience,” Cohen says. He recommends indica varieties in low doses. Products like “Moxie Mints” and “Dream Drops” are specially formulated edible options, and they have proven popular with his customers.

Since many doctors are hesitant to recommend cannabis products, let alone specify dosages, people who want to give it a try should start low and slow.