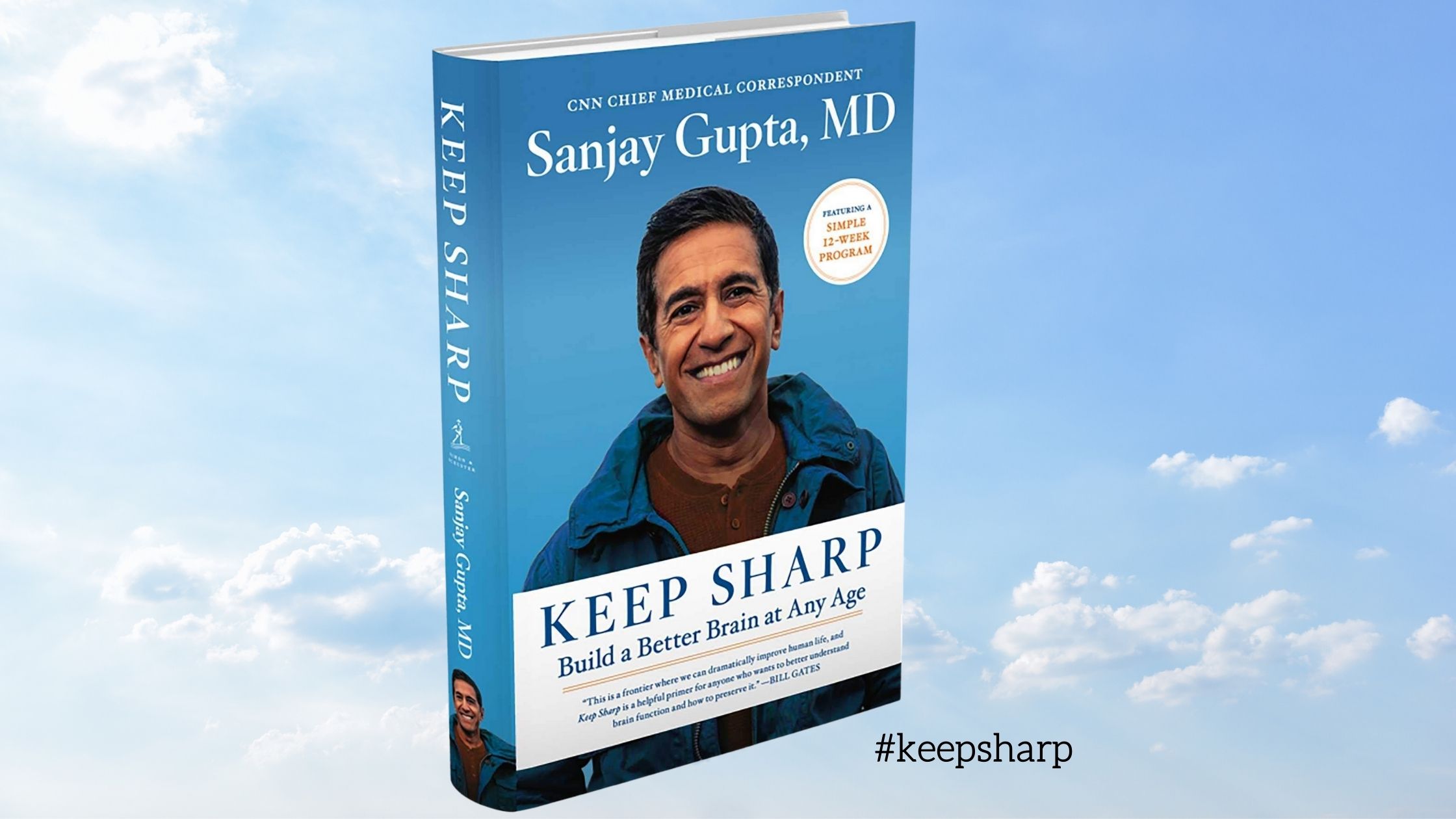 Ask most people in middle age or beyond to name their greatest aging fear and you’ll likely hear the words dementia or Alzheimer’s disease. Yes, the C-word and heart disease are a concern but virtually no one wants to lose their cognitive ability (everyone wants to stay sharp).

Statistics suggest our collective fears around cognitive decline are not hyperbolic. Globally, the number of people living with Alzheimer’s disease will increase to 152 million by 2050, a 200 percent increase from 2018. By 2060, the number of Americans with Alzheimer’s disease or cognitive impairment is expected to climb from 6 million to 15 million. At that point, a new case of dementia will be diagnosed every four seconds.

Enter Dr. Sanjay Gupta. A noted neurosurgeon and professor at Emory University School of Medicine, Gupta is also CNN’s chief medical correspondent. His new book Keep Sharp: Build a Better Brain at any Age, is aimed at helping us realize that brain decline is not inevitable. Yes, brain changes can begin 20-30 years before any overt cognitive symptoms, but you can improve your brain function at any point by following some of his straightforward strategies for building a better brain to help you stay sharp.

The book is divided into three basic parts: fundamental facts about how the brain works and biological risk factors for cognitive decline; strategies you can take to protect and heighten our brain function, including a 12-week program you can follow to improve your brain; and finally the challenges of diagnosing and treating brain diseases.

Some readers might find the first part the scariest. That’s the chapter where Gupta asks 24 questions to help you assess your risk. He says it shouldn’t scare you but…see the first sentence in this story. Questions range from “do you avoid strenuous exercise” and “are you a woman” to “do you sit most of the day” and “are you over the age of 65.” If you answer yes to five or more of the questions (which is not that hard to do), your brain, he says, may be in decline or could be soon.

Gupta quickly moves to potential solutions, though. He dispels 12 destructive myths around brain health, such as that older people are doomed to forget things and can’t learn new things, and then offers what he calls the Five Pillars that can help you maintain or improve brain health. These include exercise, staying connected, relaxing (especially sleep), trying new things, and eating healthily.

None of those ideas is particularly shocking. It’s virtually impossible to get through a day without at least one story or advertisement touting the potential benefits of exercise or maintaining a healthy weight.

Following these general tenets, though, can often feel overwhelming. Gupta breaks down how little it can take to make a difference. Take healthy eating. Rather than insisting that eliminating sugar entirely is the only way to brain health, Gupta instead advises us to limit intake. (Also included in that group to limit are red meat, whole-fat dairy, fried food, and processed foods.)

To help people implement the Five Pillars, he shares a 12-week program to better brain health that will help you stay sharp. He suggests habits to adopt each week, all of them designed to be manageable. Not enough time to exercise for 30 minutes in one stretch? No worries, he says. Research shows that 3 10-minute stretches of activity can be just as effective to your general health. Not sure exactly how to manage to eat healthily? Keep this SHARP acronym in mind: S for slash the sugar, H for hydrate smartly, A for adding more omega-3s from natural sources like wild cold-water fish, R for reducing portions, and P for plan meals ahead.

The book ends with a look at diagnosing and treating the unhealthy brain. Gupta looks at symptoms and offers ideas about treatments as well as information for caregivers looking for support and suggestions. Overall, he is hopeful. Vaccines are being explored as are other new therapies. “I am convinced that we have created many of the problems that plague us,” he writes, “and this presents an opportunity.”

Your Brain at a Glance