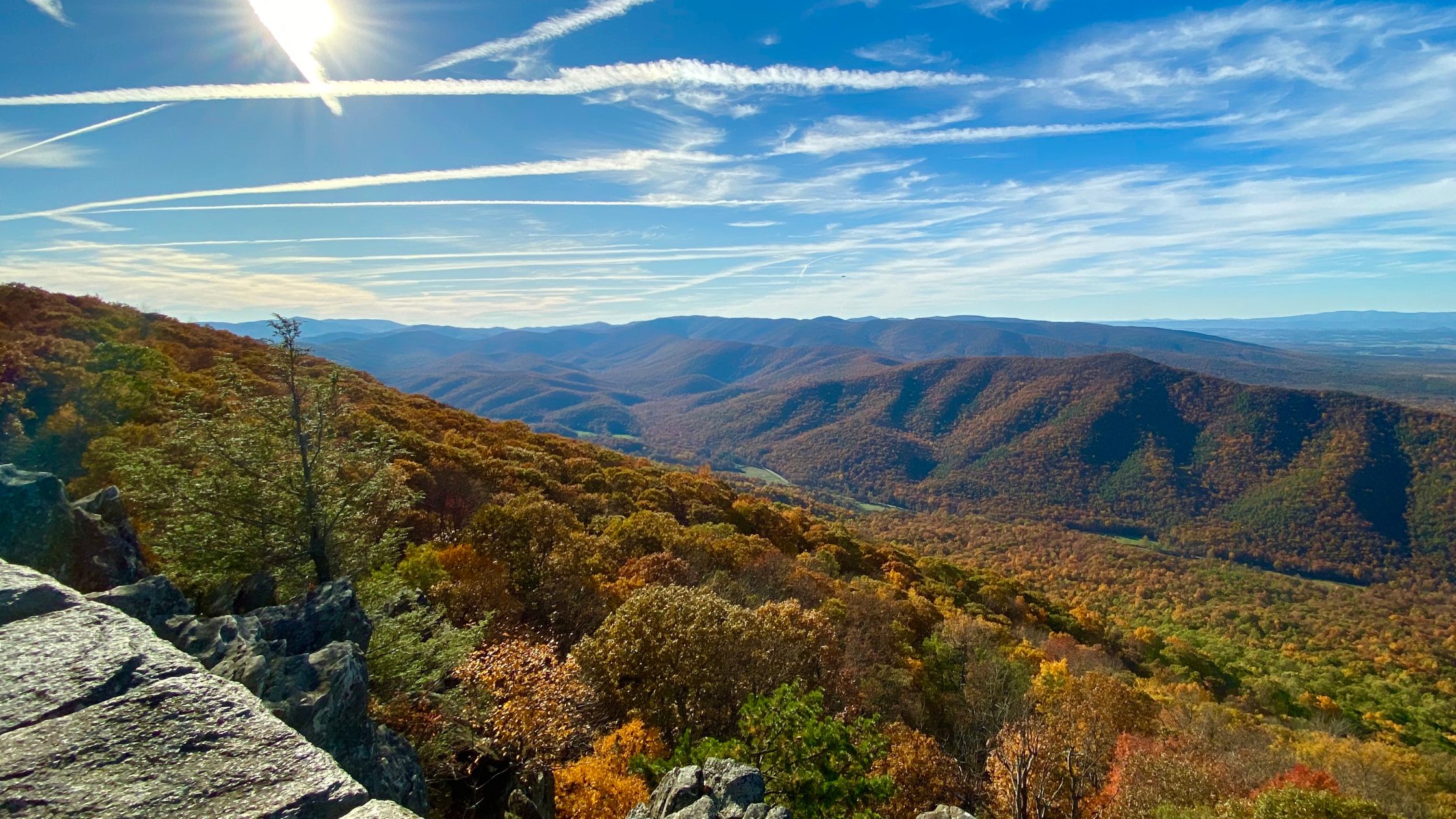 If you’re looking for natural inspiration, the Shenandoah Valley in Virginia offers an incredible number of wonders to explore. As the Shenandoah River winds its way down through the Blue Ridge and Allegheny mountains, weaving past sleepy towns and rolling fields, it has created some geological features that will take your breath away. Thankfully, the valley’s unique formations have been painstakingly maintained as tourist attractions and Federal conservation parks, and the surrounding towns emit a welcoming sense of serenity. Because the area referred to as the Shenandoah Valley is so vast, we can hardly create a comprehensive list of things to do, but we’ll try to get to all of our favorites.

A Brief History of the Shenandoah Valley: 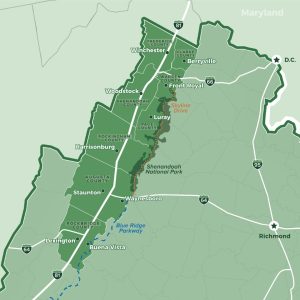 The Shenandoah Valley encompasses the Great Valley of Virginia, extending from Virginia into Maryland and Pennsylvania. It harbors vast natural resources thanks to rich soil, abundant water, and a mild climate, so many Native American tribes fought to occupy its bounty. Eastern Woodland Indians used it to occupy the edges of their tribal territories, the Monacan inhabited there for a time under constant challenge, and the Susquehanna and Powhatan tribes each took their turns as well.

In the eighteenth century, the Valley was the backcountry frontier of the colonies. Quakers, European immigrants, and some nonconformists from Pennsylvania and eastern Virginia began settling there. Later, their legacy — as people who sought refuge from the systems already in place in the colonies  — caused some to question the Valley’s commitment to the Southern cause during the Civil War. Ultimately, the majority fought to preserve the institution of slavery that had been the foundation for their flourishing economic and industrial development. 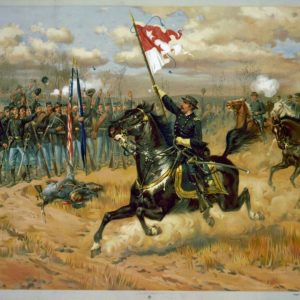 During the Civil War, the area was known as the “breadbasket of the Confederacy,” and as such was hotly contested. In 1864 General U.S. Grant famously ordered General Philip Sheridan in the Shenandoah to “eat out Virginia clear and clean as far as they go, so that crows flying over it for the balance of the season will have to carry their provender with them.” Sheridan ended up torching a great portion of the Valley instead, in an act referred to as “the burning.”

In the early 1900s people started realizing that the beauty of the region could be its next great resource to exploit. Hotels and resorts thrived, especially those near the hot springs, natural wonders (we’ll get to them) and the vast caverns that drew tourists from miles around. In 1934, the Shenandoah National Park was formed, preserving the area’s incredible natural beauty.

One of the most popular ways to to take in the area’s many natural wonders is by cruising the National Park’s Skyline Drive, a winding rollercoaster of a road that offers 105 miles of breathtaking scenery. It has a speed limit of 35 mph, so it will take at least three hours to drive the length of the road, and that’s if you don’t stop at every scenic overlook. The Dickey Ridge Visitor Center offers a perfect jumping-off point to enter the drive, with helpful exhibits, maps, and cheerful rangers to answer questions and recommend which trails to embark upon. And before you get overwhelmed trying to pack it all in — there are a ton of beautiful things to see — the passes for Skyline Drive last for seven days.

The best views in the Shenandoah Valley aren’t all above ground. Two sets of caverns are easily accessible to the public, each offering slightly different experiences. The Luray Caverns are the larger (and perhaps more touristy) of the two. Tours through the well-lighted, paved pathways are self-conducted with a brochure, so make sure you keep hold of everything they hand you on the way in. The most impressive structures — massive rooms, reflective pools, and mind-boggling formations — are well described in the pamphlet, but be sure to make an extended stop at the world’s largest musical instrument, The Great Stalacpipe Organ. Constructed by Leland Sprinkle in 1956 and encompassing 3.5 acres of the cavern, the organ uses rubber mallets to strike stalactites to produce different tones. The organ is played briefly every 15 minutes, so be sure you’re there to hear it. Also, we recommend you have a light jacket or sweater, as the caverns are cool year-round.

Skyline Caverns in Front Royal are smaller, and the gift shop is a bit dingy, but the fact that Skyline offers well-informed, personable tour guides for every group makes these caverns a more enjoyable experience. Their formations are equally as picturesque and impressive as Luray’s, and these caves are home to unique Anthodite formations as well. 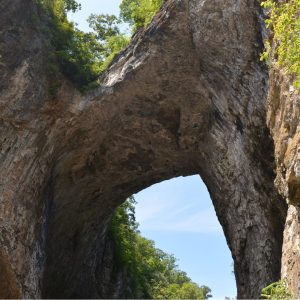 As the name implies, Natural Bridge is a formation of limestone that creates an impressive arch spanning the gorge cut by Cedar Creek in Rockbridge County. Initially a sacred site for the Monacan Indians and then purchased by Thomas Jefferson in 1774, the bridge (and the impressive caverns below) are now a popular place to visit. As such, the town of Natural Bridge has developed a number of quaint-but-booming small businesses, so it’s a great place to find antiques, unique boutiques (say that three times fast), family-owned restaurants, and a number of local vineyards and breweries. 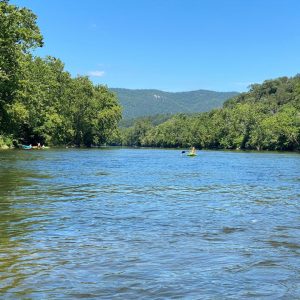 The mountains are a huge draw to the area, but we can’t forget to mention the Shenandoah River as a major recreational feature. Kayaking, canoeing, fishing, tubing, and camping along the rocky shore are all super popular activities during the warmer months, so just about any small town you visit in the Valley includes several outfitting businesses.

Thanks to its long history as a tourist destination, the Shenandoah Valley is host to a number of small museums and experiences. For example, included with admission to the Luray Caverns are tickets to the Car & Carriage Caravan Museum, Toy Town Junction, and the Shenandoah Heritage Village. We ducked into each one on a rainy visit, and while we wouldn’t make a trip just to see these offerings, we didn’t regret it, either. The Car & Carriage museum has a huge showcase of different vehicles from the past, and takes about 30 minutes to walk through. Toy Town Junction is the place of nightmares — antique toys staring from behind plexiglass barriers with their glassy eyes — but it houses a food counter that sells delicious fudge. The Heritage Village is a pleasant stroll through the area’s history; the interior museum houses some truly impressive artifacts, and the exterior is a beautifully laid out village with a schoolhouse, blacksmith, and a small vineyard that provides tastings you can enjoy on site.

For classic TV fans, just up the road from the caverns is Cooter’s, a Dukes of Hazzard Museum and Replica Cooter’s Garage with the General Lee, Cooter’s Tow Truck, Boss Hogg Caddy, and appearances from the man himself. There is a ’50s style diner, a huge gift shop, and they host live bluegrass concerts every Saturday and Sunday.

While we’re here, an honorable mention has to go to Dinosaur Land. This roadside attraction features over 50 massive dinosaurs of such questionable construction, you might pull up and wonder if you’re in the right place. Some of the sculptures are relatively accurate, while others are now just purely hilarious. If you find yourself in the Valley with grandkids, be sure to take them for a memorable experience.

Shenandoah Valley is one of the many places across the country that has benefitted from the rising market for smaller, locally-owned breweries, distilleries, and vineyards. The mild climate and rich soil are perfect for growing grapes and hops that lend award-winning flavor to the numerous local libations.