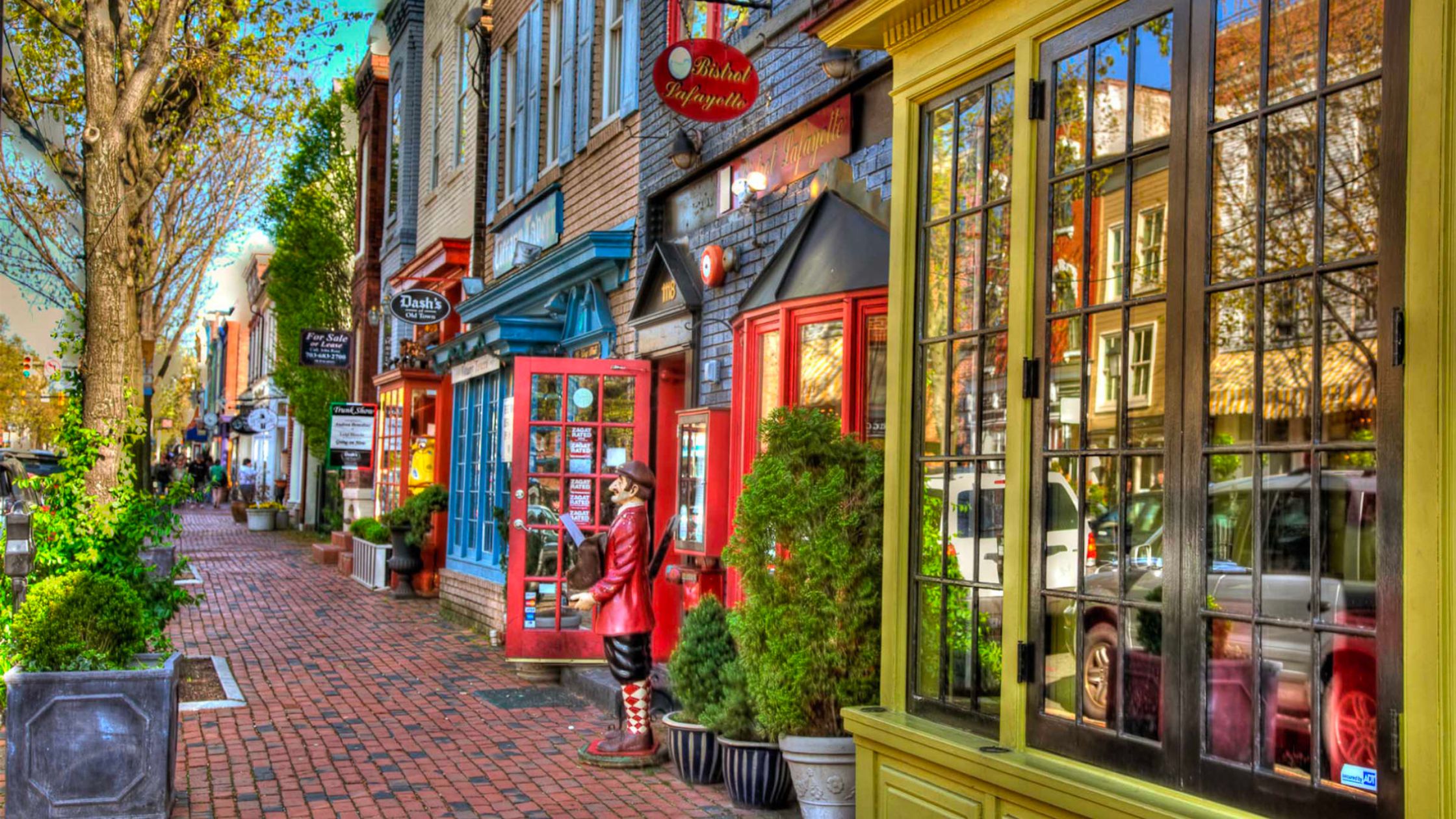 Washington, D.C. is always a rewarding trip to take, what with its innumerable museums, cultural attractions, restaurants, and sports offerings. But what many people don’t know is that a town nestled just across the Potomac offers many of those same options in an unbelievably picturesque setting and without the hustle and bustle of the nation’s capital. Old Town, Alexandria is a romantic spot to spend a weekend (or longer), with plenty of boutique hotels to stay in and enough attractions to keep you happily playing tourist for days on end. So, whether you visit for the amazing restaurants, the waterfront area, or monuments to our country’s past, you should really check out the town that was voted a Travel + Leisure Best City in the U.S. 2022, as well as a Best City on the Rise 2022 by Southern Living.

Alexandria, Virginia, is most commonly known as George Washington’s adopted hometown. He helped to develop the area (he surveyed the city as a teen), owned a townhouse in Old Town, and he frequented Gadsby’s Tavern — which still exists today — along with many of his outspoken political compatriots. After all, Old Town was an easy 9 mile journey north from Washington’s estate, Mount Vernon.

Founded in 1749 by Scottish merchant John Alexander, Alexandria was one of the young nation’s busiest ports, which allowed for its early development and subsequent prosperity. It is important to mention, though, that in addition to dealing in regular goods and supplies, it was one of the largest domestic slave trading ports as well. This inextricably links Old Town’s historic prosperity with that of the unpaid labor of countless men, women, and children. Thankfully, in recent years the area has made great efforts to recognize this fact, balancing out the many historic monuments to Revolutionary and Civil War heroes with those of the people who were critical to the area’s success: the slave population and Civil Rights leaders from the area.

A Few Highlighted Museums to Consider

Alexandria is steeped in history, with over 140 locations associated with Washington and his many exploits. Each of those locations is worth checking out, but you absolutely should start at the most impressive: Mount Vernon. You can tour the mansion, walk the expansive grounds and verdant gardens, and explore the Pioneer Farm, gristmill, or distillery. We highly recommend a tour of the distillery, which is slightly off the beaten path from the main estate but has devoted tour guides and a fascinating look into the process of making whiskey. Walking through the building is worth it for the intoxicating smells alone, but a bottle of George Washington’s whiskey also makes an impressive souvenir to bring home.

Speaking of drinks, Gadsby’s Tavern Museum is worth a visit. Comprising both the tavern and a hotel, the establishment was made famous by the proprietor John Gadsby and his ability to provide unrivaled hospitality to the young nation’s up-and-comers like the Washingtons, Thomas Jefferson, and the Marquis de Lafayette. Gadsby’s was the center of political, business, and social life in Alexandria, and as such it played host to Washington’s Birthnight Ball in 1798 and 1799, as well as Thomas Jefferson’s Inaugural Banquet in 1801.

If you can’t make it down the parkway to Mount Vernon, The Carlyle House is a beautiful restoration of an 18th-century mansion right in the center of Old Town. It is considered anexemplary piece of Georgian-style architecture, has a fascinating history, and the gardens are nothing to sniff at, either.

The Stabler-Leadbeater Apothecary Museum is a loving preservation of one of the longest running pharmacies in the United States, with over 20,000 hand-blown glass containers and archival ledgers that include names like Martha Washington and Robert E. Lee. Tours allow patrons to see medicines, potions, and interesting medical equipment, and the museum also offers various workshops for budding herbalists and even Harry Potter fans

Finally, the Alexandria Black History Museum is another group of exhibits that shouldn’t be missed. It encompasses the Museum, the Watson Reading Room, and the Alexandria African American Heritage Park. Originally the segregated library for the city’s African American residents, the museum documents the local and national history, culture, and contributions of its BIPOC citizens. To truly get a full picture, though, we highly recommend participating in the African American Heritage Trail. You can find the guide online, which will take you through each of these monuments as well as the Freedom House Museum and the Contrabands and Freedmen Cemetery Memorial.

The Torpedo Factory deserves its own category, because it kind of defies definition. A former World War II munitions factory, it is now home to 82 artist studios, including painting, ceramics, jewelry, and printmaking, making it the nation’s largest number of publicly accessible working artist studios under one roof. The Factory also includes seven galleries, two workshops, and the Alexandria Archeological Museum. Spend the afternoon walking the halls, watching artists at work.

The past five years have seen a lot of changes to the area, particularly after a massive legal battle resulted in the creation of Waterfront Park and the development of several new properties. Conservatives were dismayed by the idea of change, but it has resulted in a vast improvement to an area that had been stagnant for decades. In addition to the park, which features ample picnic places, artwork, and a beautiful walkway along the river, the area known as The Waterfront is now home to a slew of fantastic restaurants helmed by respected chefs. Places like Hummingbird, led by the James Beard-nominated chef Cahal Armstrong, Vola’s Dockside Grill, or BARCA Pier and Wine Bar are some of the most noteworthy favorites. If you can’t afford to eat every meal here, at least try to get after-dinner cocktails on one of their patios, as the atmosphere can’t be beat.

The Waterfront also offers several options for sight-seeing boat tours along the Potomac, and access to water taxis that could ferry you to the D.C. harbor front, the Maryland shore, or Georgetown, which is just upriver. The coolest option — in our opinion, of course — is aboard the tall ship Providence, which is a recreation of the first ship authorized to serve in the Continental Navy (and appeared in the Pirates of the Caribbean films.) In addition to dockside tours, the boat offers themed evening excursions, maritime heritage cruises, sunset cruises, and tasting cruises featuring various cideries, rum, and bourbon distilleries.

Part of the appeal of Old Town is that it is so delightfully walkable. King Street is the heart of the area, a mile of centuries-old architecture and over 200 independently owned restaurants, museums and boutiques. You can spend a whole day just window-shopping, or peruse the shops that have everything from designer duds to housewares and children’s toys. If the walk gets to be too much, the King Street Trolley is free, even if it’s sometimes a bit hard to catch.

On Saturdays in the spring through summer the plaza outside City Hall hosts one of the nation’s oldest Farmers Markets, which is worth visiting even if just to sniff the fresh produce. There is almost always music drifting from somewhere around the corner, and the people-watching is top-notch.