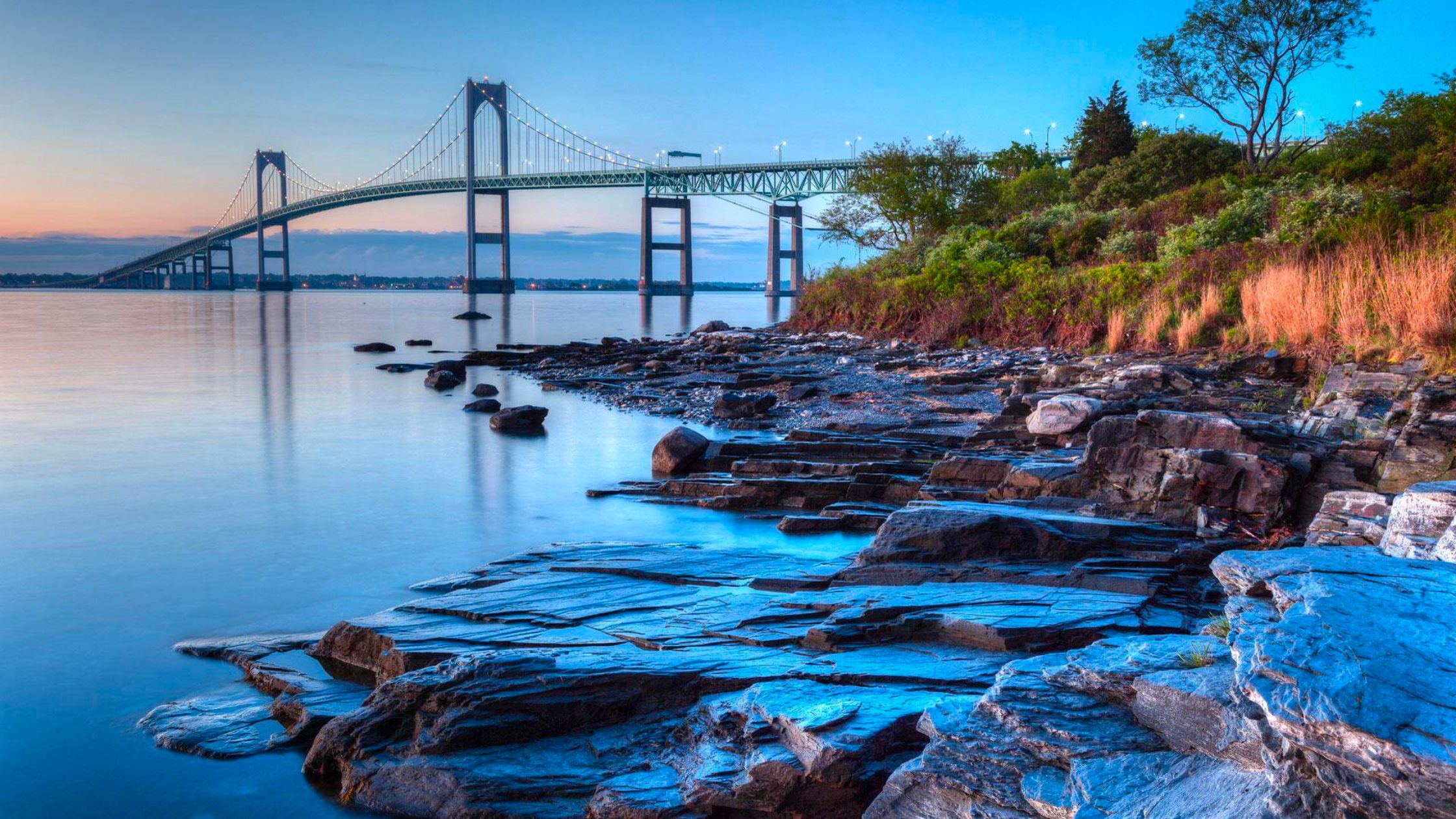 Why this hidden Rhode Island gem is worth a visit

In our quest to highlight small towns that are worth a visit, we knew that Jamestown, Rhode Island would be at the top of our list. When people plan trips to Rhode Island, Newport is usually on top of the agenda. That’s not surprising; the historic port town is like the preppy mecca for people who prefer yachting over boating, while sipping expensive martinis and discussing the status of their stock options. As a tourist, it’s a fun glimpse into the world of some of New England’s past and present elites.

But if you want real old New England charm, head west across the Pell Bridge to Jamestown, a quaint village on Conanicut Island. This blink-and-you’ll-miss-it spit of land is only 9 miles long and 1 mile wide, but it is host to a surprising number of recreational opportunities, unique restaurants, and tons of character.

The island was populated by the Narragansett tribe until the 1600s, when English colonists “made arrangements” with the natives to start using the land as grazing fields for their sheep. Then, during the Revolutionary War, British and Hessian troops violently took over and occupied Conanicut Island, ultimately destroying several important landmarks during their withdrawal in 1779.

By 1873, a steam-powered ferry boat was commissioned and began operations, running between Newport and the flourishing but mostly agricultural Jamestown. This had a significant impact on the island, as the reliable transportation made it an immensely popular vacation and day-trip destination. Many of the Gilded Age hotels that arose floundered by the 1920s, however, and the island returned to its quieter way of life. In 1940, the Jamestown bridge was approved and built, connecting the island to the mainland on the western coast, and in 1970 the Claiborne Pell Bridge replaced the ferry service that ran east to Newport. Thanks to these bridges, people now drive right over Jamestown on their way to the more bustling attractions, and miss out on one of New England’s finest gems.

The only hotel in Jamestown remaining from the Gilded Age building boom is the Bay Voyage Hotel, proudly standing sentinel upon your arrival to the island. It’s a beautiful place to get a room for the weekend, but be warned: while the bones of the old girl are still charming and quaint, the furnishings are a bit disappointing, as they’re typical of many large hotel chains. The convenience of its location can’t be beat, and it still tends to be a lot cheaper than some of the cabin or house rentals that make up the bulk of your other housing options. Also, be sure to get at least one meal there and eat on the outdoor patio, which offers unbeatable views of the bay and the Newport Bridge.

In the summertime, house rentals go fast, as people who know about the area are quick to jump on their favorite places. Many offer private beach access or, alternatively, cozy village gardens that are just a stroll to Narragansett Avenue. But a visit to Jamestown is worth it year-round, as the recreational offerings change with each of the four seasons.

Narragansett Avenue, the main thoroughfare for Jamestown, runs from the picturesque marina on the east coast of the island up a steep hill to the center of town. Here you’ll find many of the restaurants and shops that are the pride and joy of the island’s residents. Ranging from the fancy Trattoria Simpatico, which offers an innovative menu featuring freshly caught seafood and lavishly lit outdoor seating, to the more casual Chopmist Charlie’s, a friendly New England eatery, you’ll find plenty of unique places to grab a bite to eat. Slice of Heaven Bakery and Cafe is the most popular place to get breakfast or lunch, so you’ll often find a line of locals waiting to get their usual orders. Village Hearth Bakery is another worthwhile place to spend an afternoon sipping gourmet coffee and snacking on their amazing French pastries. On Sunday evenings the smell of their handmade pizzas cooking in their brick oven beckons long lines, and it’s worth the wait. The area also has several art galleries, small boutiques and organic produce markets that make a stroll up Narragansett worth increasing your heart rate.

All the stores and restaurants are locally owned, and the majority are family-owned as well. The true appeal to these businesses, though, really lies in the devout local following they’ve developed. The island is a tight-knit community, and it seems that everyone holds a sense of pride with keeping their patronage tight-knit as well. While tourists are gladly welcomed, it can be heart-warming to see how every local is greeted by name, and often orders are started with just a nod or a gesture. It is this small-town nature that gives Jamestown the cozily eerie feeling that you’ve suddenly wandered into a Pleasantville-type of utopia, where the town’s values are oddly but adorably old-fashioned.

Fort Wetherill State Park: Situated on 100-foot-high granite cliffs, this former coastal defense battery and training camp is just 1.5 miles south of downtown, making it the easiest park to access. It is known for its spectacular view of Newport Harbor and the East Passage of Narragansett Bay, and is popular for picnicking, boating, fishing, and hiking.

Mackerel Cove: The most popular beach on the island, Mackerel Cove splits the northern end of the island from the Beavertail area to the south. Don’t expect white sand beaches — this is still Rhode Island, after all. But in summer this is where you can find the warmest water for swimming, lifeguards are on duty, and a Del’s Lemonade truck is almost always around to provide some cold, sweet refreshment. This is also a great place to paddle board, kayak, or snorkel. In the off-season, this is the spot to go clamming (a license is required!) or to look for seals who come into the tiny harbor to raise their pups.

Fort Getty Recreational Area: Just past Mackerel Cove is historic Fort Getty, which was used as an observational lookout and defense structure for Narragansett Bay during both world wars. Now, it’s a park that offers fishing, a boat ramp, hiking trails, and an overnight camp ground.

BeaverTail State Park: Home to New England’s oldest operating lighthouse, Beavertail State Park is another often-overlooked opportunity. The lighthouse itself is both an active beacon and a museum dedicated to its own storied history. It also has an indoor, free public aquarium that exhibits a surprisingly wide variety of the marine life commonly found in Narragansett Bay (and docents who are all too eager to share their wealth of knowledge about them.) Like all things in Jamestown, everything is small and quaint, but worth the afternoon to explore. Around the lighthouse are picturesque jagged cliffs and coves that provide excellent fishing and sheltered swimming areas, as well as a great vantage point for picnicking, kite flying, painting, photography, or simply sitting and watching all the sailboats go by.

Watson Farm is a picturesque farm that depicts what it was like to practice agriculture over 200 years ago.

Jamestown Windmill:  The town’s original 1787 windmill is open to the public during the summer season, and is kept in working condition so you can actually see it in action.

Events Not to Miss:

Jamestown is great year-round, but there are a few special events that are very much worth the effort. In mid-August the island celebrates with a Fool’s Rules Regatta. Participants must build a water craft using only found materials and attempt to keep it afloat for as long as possible. A cannon fired at 9 a.m. sharp opens the festivities, which is when the construction of crafts may begin. (The craft can be pre-assembled, but it must be deconstructed and re-assembled on the beach to count.) The “boats” are classed and given awards based on the number of people who are on board, and there is great debate over whether it’s funnier to have more sailors on a large craft, or a single child in a smaller one. The hilarity is overseen by a man dressed like the mayor in Jaws who provides excellent commentary. This event is beloved by locals and tourists alike, and really should be witnessed at least once in a lifetime.

Summer Music: Live music is performed by the water at East Ferry every Thursday night, offering free entertainment that is perfect for an evening picnic. Be sure to stop by Spinnaker’s for some ice cream, first.

Visit From Santa Claus: Bring the grandkids at Christmastime to watch Santa and Mrs. Claus arrive on the island by boat. They then lead a procession to Conanicut Marina, where they will sit and talk to any children who want to tell them what they want for Christmas.