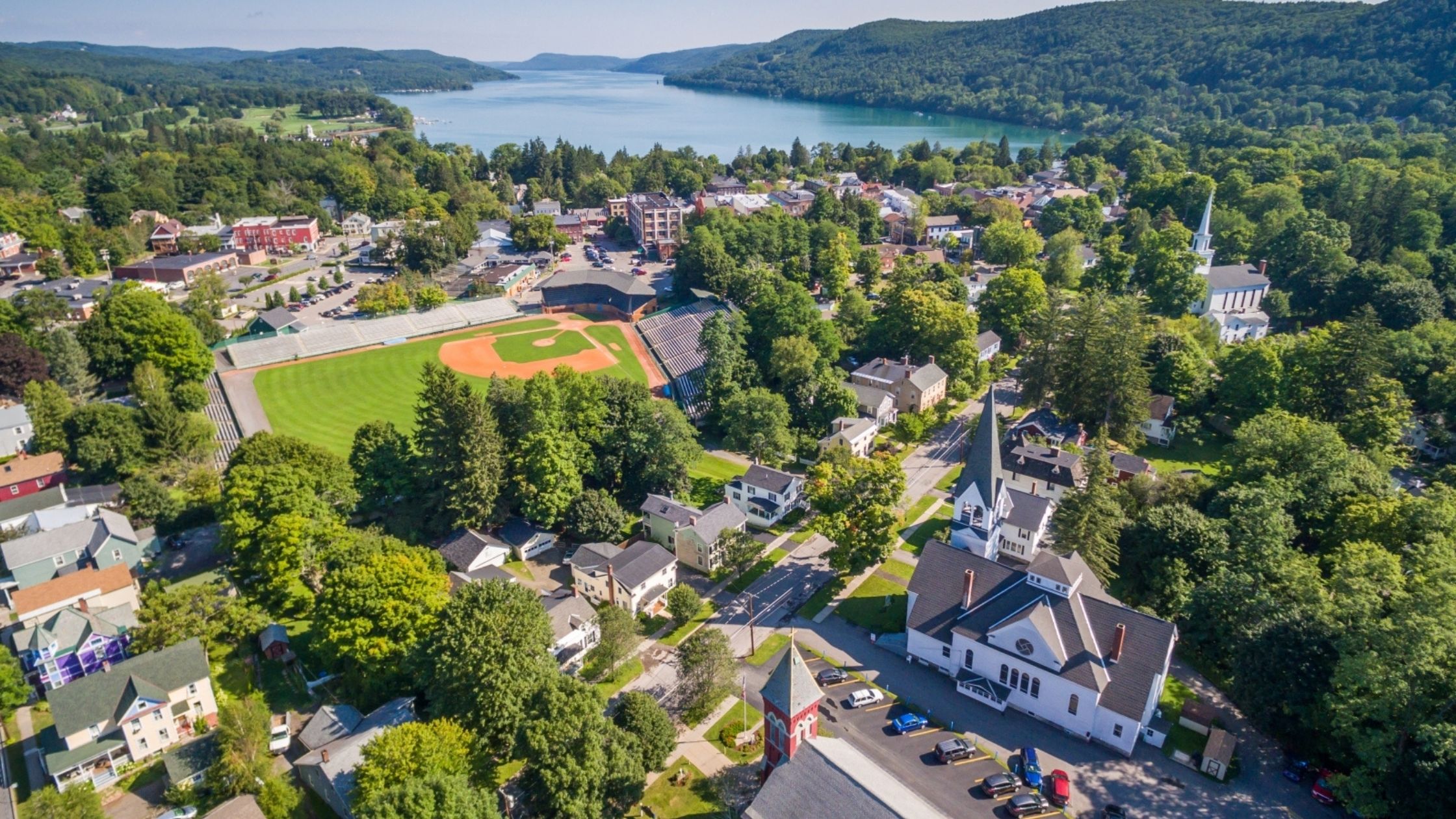 A short drive from the Capital Region, Cooperstown has something for everyone

Described as a “proud one-stoplight town” on almost every municipal website, Cooperstown has a surprising number of draws for people looking to absorb a dose of pure Americana. Situated in the foothills of the Catskills Mountains, this “small” town is known by many as the home of the Baseball Hall of Fame, but it has other notable cultural institutions as well, including The Farmers’ Museum and Glimmerglass Opera Festival. You may also be familiar with the name James Fenimore Cooper, who wrote several novels set in this idyllic town (does The Last of the Mohicans ring a bell?) The town also has beautiful parks to explore, art museums to peruse, shopping and fine dining along Main Street, and is home to fairs and festivals. In other words, it’s the perfect quick getaway.

Cooperstown was founded in the late 18th Century by William Cooper, a respected judge, member of Congress, and notable land developer. By the middle 1800s the town was a popular summer retreat, and many of the estates and houses built during that time are still in use, such as the gorgeous Otesaga Hotel.

Cooper’s grandson, novelist James Fenimore Cooper, became one of its most notable celebrities, but most people associate Cooperstown with baseball because of the rumor that Abner Doubleday — a decorated Union Army officer who fired the first shot in defense of Fort Sumter — invented baseball there in 1839. While that rumor has since been found to be malarky, the town embraced it and Cooperstown philanthropist Stephen C. Clark proposed establishing the Baseball Hall of Fame there as a potential economic engine. Since then, Cooperstown has established itself as a “village of museums,” playing host to many institutions honoring its colonial past and the arts.

The Baseball Hall of Fame

For baseball fans, Cooperstown is their Graceland. The Baseball Hall of Fame, which is home to over 40,000 artifacts and more than 250,000 photographs and images, sprawls through five buildings surrounding historic Doubleday Field, where retired baseball legends play annually in the Hall of Fame Classic over Memorial Day weekend.

The museum has an almost overwhelming amount of baseball lore to take in. To address this problem, curators have created The Hall of Fame Starting Nine. Basically, you choose your team of preference and the museum will provide you with that team’s top nine exhibits not to miss during your visit. We recommend you start with that, and see where it takes you.

But Cooperstown is much more than a baseball fan mecca. The Fenimore House Museum is home to one of the country’s most extensive folk art collections. You can tour the neoclassical mansion Hyde Hall to admire its impressive collections, or you could opt to take the ghost tour, if that’s more your speed (the house was featured on a thrilling 2013 Ghost Hunters Halloween special.) Naturalists can enjoy a riverboat tour on the Glimmerglass Queen, which includes tasty victuals and a narrated view of the local scenery. And you can’t leave Cooperstown without visiting the Farmers’ Museum, one of the country’s oldest living history experiences.

Glimmerglass Opera is another highlight, offering concerts and plays of all kinds throughout the year, and a giant festival that runs through most of July and August. Food trucks and concession stands are on the grounds through the summer, and you can pre-order a gourmet picnic to eat on the lakefront lawn pre-show.

Cooperstown is a mecca for outdoor enthusiasts as well. During the warmer months, you could relax with a picnic at the Lakefront Concert Series, which kicks off in July. Interested in more athletic recreation? Head to Three Mile Point Park, Fairy Spring Park, or Glimmerglass State Park, which offer swimming, paddleboarding, kayaking, hiking, and camping. Otsego Lake has a 22-mile bike trail around Otsego Lake for biking enthusiasts. Want to go, um, deeper? Check out Howe Caverns. During the winter, Glimmerglass State Park offers camping, cross-country skiing, ice skating, and tubing, making it a true four-season experience.

The village of Cooperstown, and particularly Main Street itself, offers an impressive variety of shops that sell everything from antiques to unusual clothing. The restaurant culture is top-notch, with fare that ranges from casual to fine dining, with special pride held for the Farm-to-Table offerings featuring organic, locally-sourced meals. From June to October, Cooperstown is host to a thriving bi-weekly Farmers Market as well.

Otsego County used to be the hops-growing capital of America, and Cooperstown loves nothing more than its own history. The Brewery Ommegang is well known for its brews and, COVID-depending, its concerts and other events onsite. There’s no need to stop at a brewery when you can experience the Cooperstown Beverage Trail, a tour specifically designed to allow visitors to taste offerings from the various breweries, wineries, and distilleries that call the area home.

Want to know more about what’s going in order to plan your visit? Check out Cooperstown’s website.

Other Articles You Might Enjoy:
Walking Through History in South Carolina