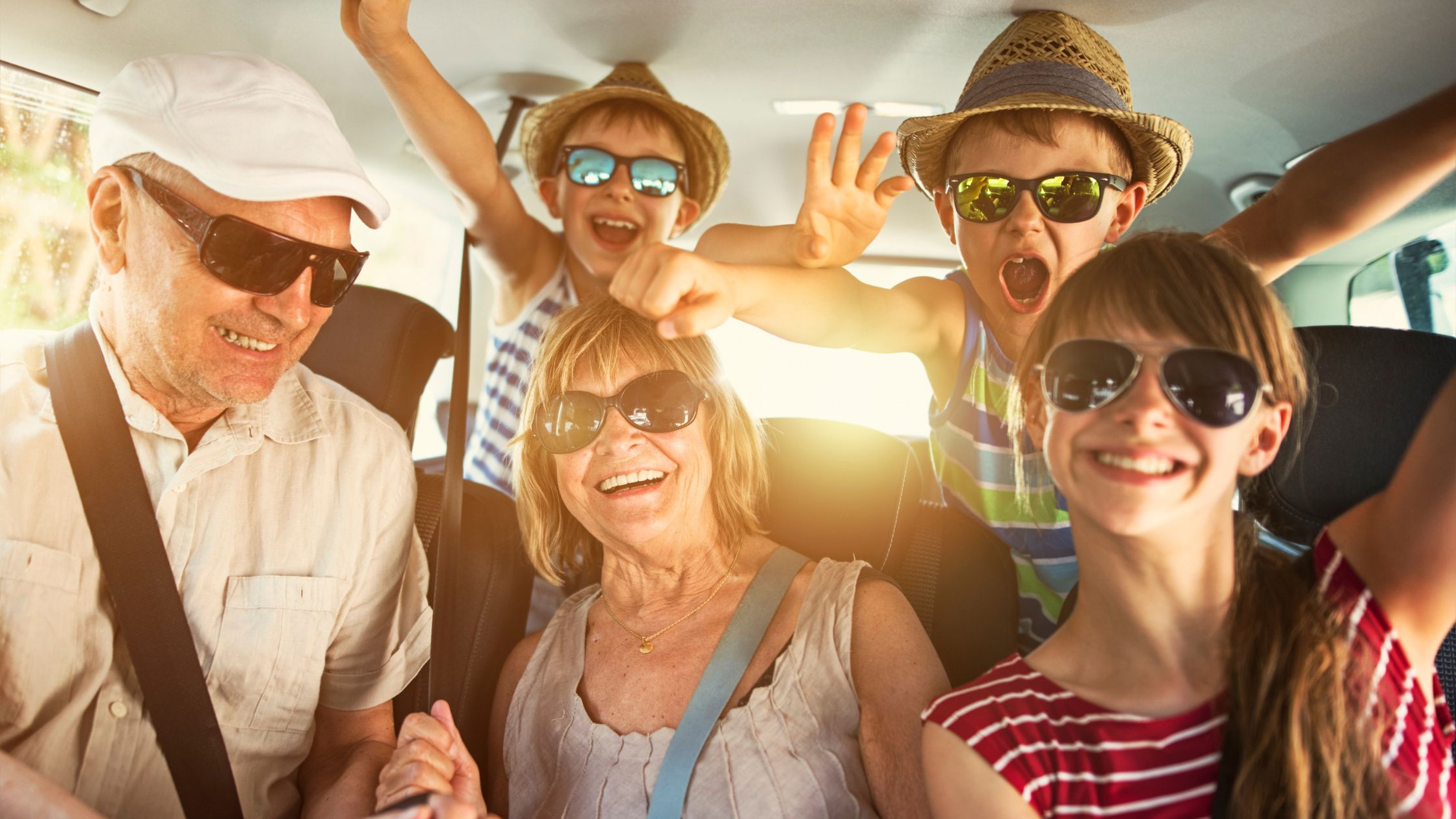 The joys (and challenges) of traveling with grandkids

It was midnight and the 2-year-old was not the least bit sleepy.

Her father, tired from a day of running around the gentle hills of western Connecticut with her and her elementary-school-aged siblings, lay on the sofa of our sprawling vacation rental house, one pajamaed arm thrown over his eyes. She ran a toy truck up and down his crossed legs.

He opened one eye and looked at her. Then he looked at me, the night owl whose genes had clearly carried downline intact.

I pulled the toddler and a pile of books into my lap. By the time we exhausted the narrative exploits of the Little Blue Truck, she was drifting off. Her father hefted her off to bed and I turned in, too.

Vacationing with grandchildren (and often, their parents) all but guarantees moments together that you can’t capture at home, not in between the busy-ness of school, errands, lessons, and chores. With our eldest daughter, her husband (he of the sofa) and their little flock, we’ve explored national historic sites and beaches of North Carolina’s Outer Banks; children’s museums in the Midwest; the Smoky Mountains; and, this past fall, a classic New England autumn. This year, family-oriented destinations, from state and national parks to ritzy resorts, are gearing up for new experiences uniquely suited for three-generation groups, and all but guaranteed to mint lasting memories.

Recent research from the University of Toronto indicates that experiences are more meaningful gifts than objects — good news for grandparents who want to explore the world with their grandchildren. Learning new things together, side-by-side, puts everyone on the same plane as a rank amateur and lets kids discover aptitudes and talents in fresh settings.

The trick is to find experiences that don’t burden one of the adults with all the tasks of setting up, instructing and cleaning up. That’s where folk schools can save the day. Modeled after European schools that built a structure around the tradition of elders teaching artisan skills to the rising generations, American folk schools typically are located in scenic rural locations and offer one- to five-day workshops that blend tradition with skill.

Professional potters, painters, quilters, woodworkers, gardeners and others design classes for various skill levels, from rank beginner to accomplished intermediate. And best of all, all that’s left for the adults is to make the arrangements (and pay) and show up.

“We try to make the experience as turnkey as possible for everybody, including the instructors. You pay the fee and you show up,” says Scott Hayden, executive director of the Adirondack Folk School in Lake Luzerne. “Show up with the enthusiasm to learn and if you’ve always wanted to try something, you can do that. It’s a noncompetitive learning environment.’

Cooking classes are popular with multigenerational groups, says Hayden. After all, you can eat your errors … or maybe not.

Also ascendant: a half-day session on how to build a bat house to support furry pollinators, and coppersmithing, which doesn’t require the heat and force of ironwork. “You can bang away to make a copper bowl or plate or wall hanging,” says Hayden. “The worst-case scenario is that you try something and you don’t like it, but then you haven’t invested in the equipment. And if you love it, you are developing a relationship with an expert in that craft.”

Great Camp Sagamore in the Adirondacks is a way for grandparents and grandchildren to get out in nature without the hassle of tent camping. The camp, a National Historic Landmark that was built by William West Durant and finished by Alfred Vanderbilt as a family retreat, is a Gilded Age wonder in the middle of pristine wilderness. Each summer the camp offers two five-night gatherings for grandparents and grandchildren (one for children 6-9 and one for children 6-14) where kids and grandparents can participate in music, nature-inspired art projects, canoeing, hiking, and games. Word to the wise: These sell out quickly so get on their email for notification of when registration opens up.

National and state parks are naturals for grandparents and grandkids, says Catherine Parker, a veteran family roadtripper who operates the travel blog Carful of Kids. First, seniors often qualify for a lifetime pass for a one-time fee of $80 that allows them unlimited entrance to the parks that charge fees. Fourth graders are also given a one-year pass, which makes that timing that combines the senior and fourth-grade passes the obvious golden year and, says Parker, a must-do.

“In the past six months, the National Park Service has finally added accessibility to its website,” she says, adding that park rangers are now well-trained in advising groups with mixed abilities about which trails will work best. Maps available at visitors centers offer opportunities to tutor grandkids in the analog skill of reading (gasp!) printed directions and serve as souvenirs, too. “Some parks now have ‘senior’ and ‘junior’ ranger programs. Those are fun activities and help you see in a short time what is most important about this park,” says Parker.

My husband and I have learned that a major challenge of three-generation vacations is crafting a balanced slate of activities that suits the interests and capabilities of each age. It’s rare for a single daytrip destination to engage everyone equally, though some historic sites with high-energy demonstrations come close.

The Wright Brothers National Memorial on the North Carolina coast offers a history of the famed brothers’ scientific process and acres of wide-open fields where rangers demonstrate the physics of flight. Our visit satiated our history buffs’ craving for detail and gave preschoolers plenty of runway for their own physics experiments. Turns out, it takes more than speed and energy to achieve liftoff — not that the kids didn’t try.

Multigenerational groups require multiple bedrooms and bathrooms. In the last decade, whole-house rentals through online platforms have become popular because they offer full kitchens for serving breakfasts and dinners that include children’s favorites (economical and fuss-free, especially after a day of adventures). But such rentals can be expensive: Our western Connecticut lodging, which comprised half of an oversized duplex, absorbed our group’s six adults and five children in its four bedrooms and two full baths, and cost $500 per night, plus a cleaning fee, plus local taxes.

Hotels and resorts have caught on and some have retooled suites to better suit families. For instance, the Sagamore Resort on Lake George offers a spectrum of flexible configurations, from suites with kitchenettes to four-bedroom condos that sleep 12.

Fluctuating prices for gas and flights aren’t dampening family enthusiasm for making up for time lost to COVID, says Kate Loweth, managing editor and senior travel editor with Tinybeans, a photo sharing platform. Grandparents account for about 10% of its five million users.

Families are focusing less on how to accomplish the trip — drive or fly? — and more on destinations that expand a family tradition. Nostalgia is the overarching theme, she says, with grandparents eager to share treasured places and activities with their grandchildren.

“What fond memories you have as a child, that’s what you want to pass on,” she says. That could mean Disney destinations, or, as in our case, centering trips around cherished New England destinations like Old Sturbridge Village, the famed living history museum; downtown Boston; and the Maine coast.

Our grandchildren are well-versed now in the North Carolina seashore, but have they inhaled the salt air at the Samoset Resort in Rockport, Maine, or dug for mysterious shelled creatures at Hampton Beach, New Hampshire, before strolling the boardwalk eating taffy? They haven’t yet, but they will — soon.