It’s been said that doing what you like is freedom and liking what you do is pure happiness. When I was a kid, come April 1st, excitement swelled in the house because we were going trout fishing. Rain, sleet, or snow never stopped us.  My Dad would make some tasty sandwiches and pack a thermos of coffee and we were off with other friends to our secret fishing spots. It was ritualistic and so much fun.  Dad had a way of making those sandwiches and I miss them to this day, they were heavenly. So, I guess you can say I got bit by the fishing bug early in life and have been very lucky ever since, to have met up with a cast of characters that love to wet a line.

I’ve had the good fortune of catching a 125 lb. Tarpon in the Florida Keys, 26 lb. catfish on Lake Champlain and not to mention some big Walleyes too.  I’ve fly fished for salmon on the Gaspe Peninsula and trout all over the Adirondacks.  It’s been a great adventure, but nothing and I mean nothing compares to fishing with my Grandson!  It could be from our dock at home, at our camp, or from the deck of our pontoon fishing boat.  The time spent with this guy is immeasurable. Now I must admit he’s a bit like me, if the fish aren’t biting he gets a little antsy. Can you blame him? Catching fish is fun and when he gets one on, look out, he’s in heaven and so am I.

This guy loves to fish, and his excitement level exceeds mine at that age. I’ve got to say, watching that kid is precious.  For being new to the game he’s been a fast study.  He’s got perseverance for hours on end and its paid off with some very nice fish.  He now has a growing collection of fishing poles and lures and is fast becoming a good storyteller on his own.

It seems but yesterday when I was holding him in my arms at the hospital shortly after he was born and here he is now, catching up to me telling stories. Time flies by fast! Too Fast!  But it does seem to pass a little slower when we are out on the water spending time together. Making memories has become our number one priority, it should be all of ours.

Some folks say to stop and smell the roses, we say its time to stop the boat and catch some fish. So, if fishing isn’t your thing, it’s ok, find something that works for you and your grandchildren and start making memories. You must fill your life with action, don’t wait for it to happen, for happiness is found when you give your love freely to those you truly love.

Tight lines – we don’t want these memories to get away! 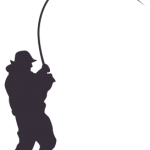