The power of NIA, expressing yourself through movement, and healing 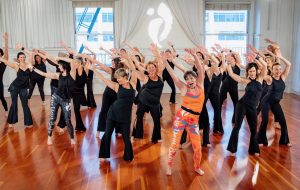 Casey Bernstein of Slingerlands is a strong believer in the power of movement. Having worked as a nurse for the first part of her career and as a life-long swimmer and former long-distance runner, she realized that movement—any type of movement—has the potential for healing. Sharing that knowledge and helping others discover the potential for movement’s power in their lives is one reason Bernstein opened the Center for Nia and Yoga, first in Albany and now in Colonie.

For decades Bernstein, 67, has been leading Nia and yoga classes in her studio and has trained would-be Nia instructors both in her studio and worldwide. In recent years, she has become passionate about working with people who are victims of trauma, those with disabilities, and people recovering from various forms of addiction. Using her expertise, she has developed special programs for these populations. Everyone, she says, can benefit from “the art of feeling better. 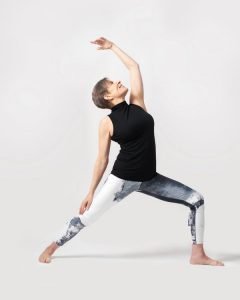 Nia is a sensory-based movement practice that draws from martial arts, dance arts, and healing arts. Through a specific choreography to music, it helps people of all shapes and sizes connect their bodies, minds, emotions, and spirit. Created by Carlos and Debbie Rosas in the 1980s, Nia was developed as an alternative to the period’s fascination with aerobics and the high-intensity/low impact fitness crazes that left them feeling unsatisfied. It is a practice that is amoebic in nature, flowing from a scientific basis into a New Age aesthetic that is even evident in its name; NIA is both an acronym (for Neuromuscular Integrative Action), and also a derivation of the Swahili term for “with purpose.”

Bernstein describes the practice as “an alternative organic fitness program evolved over the years to be inclusive of self-healing.” A typical Nia class uses a combination of 52 movements. Dancing is done barefoot to music that can vacillate between soothing native flutes to contemporary bass-thumping pop songs—whatever the instructor decides is fitting for the class’s goals. The leader typically draws upon multiple martial arts forms as well as yoga poses and dance movements. You could think of it almost as Zumba but with substance, or, as Bernstein puts it, “an eclectic fitness practice with aesthetics.”

During a class, the lights are often dimmed, and the studio is designed with comfort in mind. Bernstein’s studio has soft, accommodating floors in her studio, which is critical both for dancing and for floor play. Comfortable, flowy clothing is recommended, and your shoes (and self-consciousness) should be left at the door. 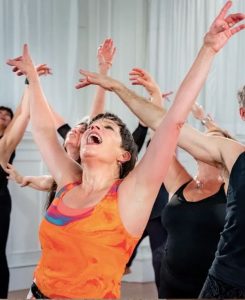 Bernstein discovered Nia over 30 years ago when her regular fitness instructor started offering a class described as “New Age Aerobics” after her usual Mega Workouts session. Bernstein was instantly taken with this form of exercise that offered more intention, and more natural and organic movement than those that focused on just the mechanical function of the body. What started as a fun method of cross-training for her other athletic endeavors turned into a lifelong passion for bringing the joy of expression to people all over the world.

Much like karate, Nia is broken up into a hierarchy of belts that you can earn as you gain more experience in the practice. You start out as a White Belt, then you progress through the Blue and Brown belts. Earning a Black Belt requires mastery of Nia, and a desire to incorporate its principles into everyday life. Bernstein, though, has worked extensively over the years to earn a Green Belt, the mastery level past the Black, which requires training that is aimed at those who want to teach Nia to others. 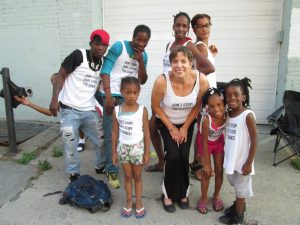 An experienced Nia leader, Bernstein has led Nia training in both Italy and Jerusalem, which she says have been wonderful hotbeds of Nia enthusiasm. Bernstein loves spreading the art of Nia because it brings better health and vitality to a wide range of people, and more importantly, it is a way of spreading joy and playfulness. Her latest project is to try and create a program specifically for nurses, as she knows firsthand that they are overworked, underappreciated, and in desperate need of help learning how to deal with stress through self-care.

Part of the beauty of Nia really comes from how malleable the experience can be. Classes are designed to move past the “no pain, no gain” mentality of many fitness programs to focus instead on movement itself as medicine. The idea is that movement should induce joy; if you can acknowledge the promptings and listen to the voice of your body, you can improve its condition and feel better. Bernstein tells a story about herself to prove the point. A few years ago she was diagnosed with a severe rotator cuff tear, and shoulder replacement looked imminent. Instead, along with adjunct therapy like acupuncture, Bernstein was able to continue in her career as a Nia instructor and use her art to bring it back to full functionality. “Does it ping a little? Does it talk to me? Sure! But I don’t need surgery.” 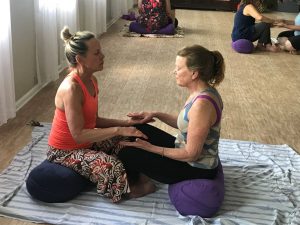 The adaptability of Nia has enabled Bernstein to work with people who have suffered from Traumatic Brain Injury, substance abuse, trauma, and with people living with advanced stages of Alzheimer’s Disease. She refers to this part of her practice as The Art of Stepping In because it’s all about bringing Nia’s concept of joy of movement to populations who “ordinarily wouldn’t even consider it.”

Selecting the perfect music is critical, Bernstein says. to keep different populations engaged “because if they’re not engaged they just check out.” She tailors each class to fit each population’s needs. Her nursing background helps give her the ability to have medical insight into a condition and then use Nia to help alleviate it. For example, when she taught a group of Alzheimer’s patients, she deliberately didn’t use a lot of language or verbal instructions to lead the class. She used three classic songs from the musical Oklahoma on repeat, wore the same brightly-colored outfit at each session, and she started out slowly, having her students merely mirror her actions. She was richly rewarded when those patients were able to follow along, gradually loosening up, and finally were openly playful by the end of the class.

“Forget sudoku! It really is movement patterning that keeps the brain vital, so we provide form and choreography that they learn, but there’s also freedom of expression.”
– Casey Bernstein –

A newer program that she offers at her studio is cheekily called Floor Play. The main concept is to use gravity and the forces it exerts on your body as a conditioning tool. That means a lot of the class involves getting up and down in different ways. While it sounds a bit silly, getting up from the floor is a critical skill for people in aging populations, so this method helps to build agility and prevent common injuries.

“Conditioning is what brings people in the door. They need to get moving. I get a lot of menopausal women who come in, saying, ‘I’m 54, I’m feeling really old, and my doctor told me I need to exercise more.’ Well, I don’t tell them that I’m 67 at that point,” she chuckles, “but I do have a different vitality. I have been exercising my whole life, and there’s a vitality that ends up going with that. So if the reason—conditioning or their doctor—brought them in the door, that’s awesome. However, people end up finding that [Nia is] much more than that: The freedom and emotional expression.”

When she talks about expression, Bernstein is referring to how Nia and her classes help people become more comfortable expressing themselves physically. One of her secret joys is watching the journey of a woman who starts out coming to class wearing a big, baggy T-shirt but over the course of time, her clothing gets more form-fitting, brighter, and even revealing. “It’s not about size, of course,” she says, “but that woman isn’t hiding anymore.”

And as for the self-healing aspect, Bernstein likes to end classes with what she calls “holding space.” “[I ask them to] take a moment and be there. Be themselves. Wholeheartedly. That is one of the things that brings people to Nia and is what I want them to come away with; there’s a sense of coming home, and what that means is they’re coming home to their body. Coming home to who they are. That sensation that ideally is found through the joy of movement of ‘ugh, I’ve come home to myself,’ and is the ultimate experience for a Nia student.”

“Age is an issue of mind over matter. If you don’t mind, it doesn’t matter.”

As a magazine and website devoted to living your best life as you age, we decided to celebrate Twain’s concept by highlighting Capital Region residents over 50 who are living their best lives. Some are entrepreneurs. Others have started new careers in their second or third acts. Each in their own unique way is making a difference and enhancing the life we all enjoy in the Capital Region.

If you know someone who would make a good profile, send us an email at editor@55pluslifemag.com. We’d love to hear more about what people are doing as they continue to create and recreate themselves.

Up Close with Elaine Stock on her New Historical Fiction Book

Up Close with Marcia White

Up Close with Benita Zahn

Up Close with Renee Giannetti