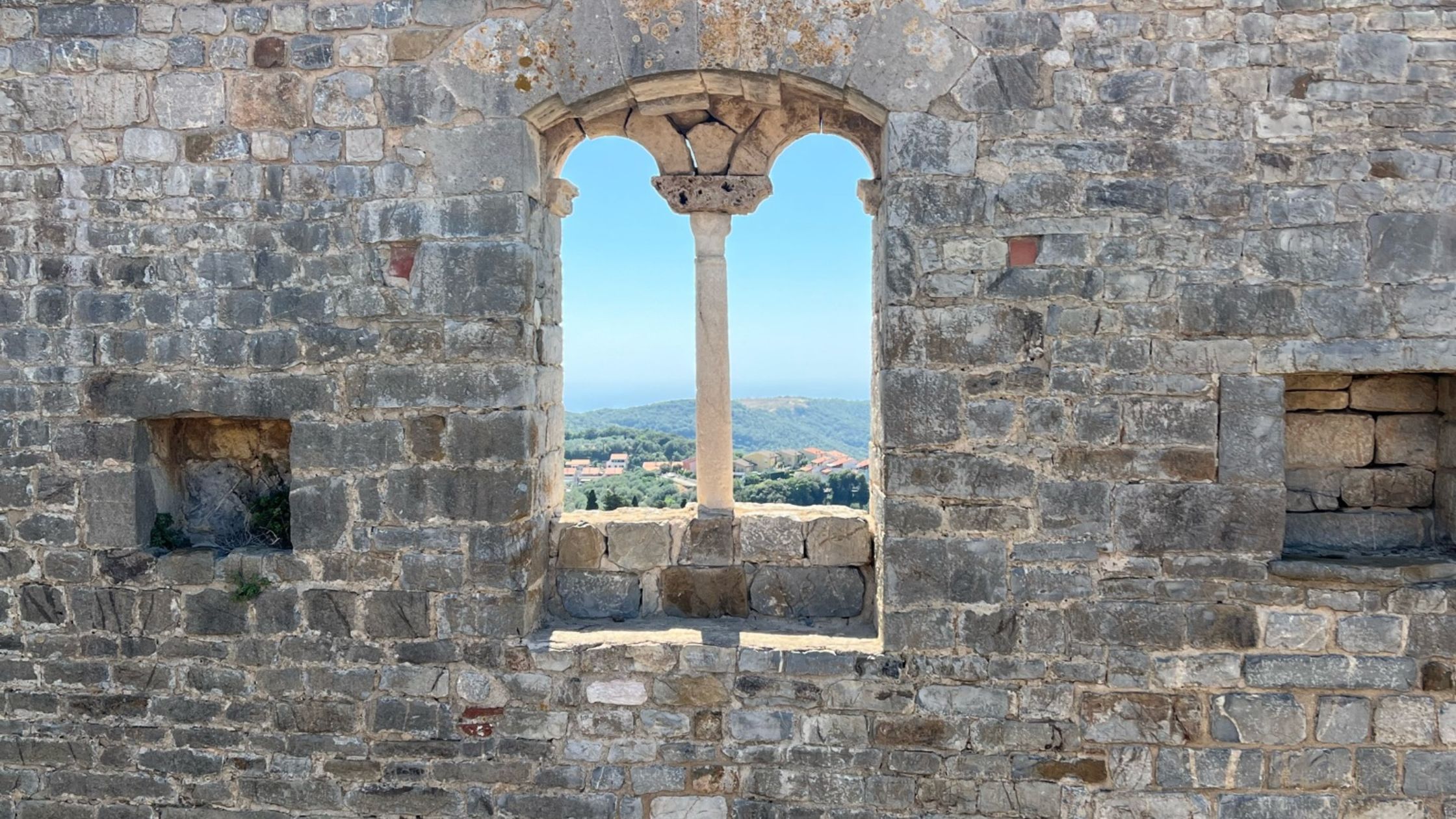 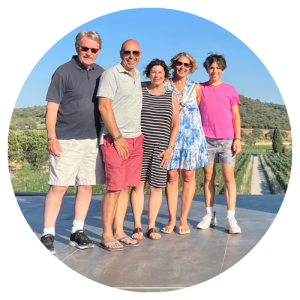 It had been a good 25 years since my last trip to Italy. This trip was going to take on a new meaning as I was returning to a place I had frequented as part of my previous career. Now I was taking a multigenerational vacation with my husband, our son, and my in-laws.

We stayed with a longtime family friend from Italy I met years ago while working in the textile industry, who now owns and runs a charming, Tuscan decorated four-bedroom, bed-and-breakfast named CivicoUno Campiglia in Campiglia Marittima.

Part of Tuscany’s Maremma region, Campiglia Marittima is located in the Province of Livorno, about an hour and a half southwest of Florence by car and just inland from the Mediterranean Sea. Surrounded by nature parks, this historical village perches high on the hill around the Gherardesca Castle overlooking a breathtaking view of the entire valley. Campiglia comes from the Latin campus, or “field.” In 1862 the word marittima (from Latin Maritima) was added to reflect its belonging to the Maremma, the area by the Tyrrhenian Sea.

From the moment we arrived, I felt transformed to a place where time stands still. I lost track of time, and days blended into nights. It was authentic and real, a glimpse into what once was, what life used to be 2,000 years ago. By the second day there, neither my husband nor I knew what day it was, nor did we care—a true sign that we were on vacation!

Here are some highlights of this wonderful adventure, in case you want to visit. If you love Italy, I recommend you include this area on a future trip. It’s a place where you feel the magic of a true Tuscany gem.

This is a perfect destination for those who love the sea, beaches, nature, sport activities, and plenty of good food and wine. With a pace of life that encourages relaxation and unwinding, the area is close to a beautiful coast sprinkled with beaches as well many nearby small hilltop ancient villages just a short drive away. The area is full of cultural and landscape attractions, and you can spend time mountain biking, trekking or just walking through the steep alleys and ancient narrow streets.

Don’t visit here expecting large American hotels. B&Bs and boutique hotels are more the norm. Nor will you find a lot of American tourists. Instead, Campiglia Marittima is filled with vacationing tourists from Germany and Switzerland, as well as other Italians. Come expecting an authentic immersion into Italian life that you will not experience in larger, tourist-crowded spots. While we were there, my husband and son took a bike ride through the old mining camps overlooking the Mediterranean, the vineyards and cork trees, the sunflower fields, olive trees and villages. My husband said it was a top 10 moment in his life.

Also high on the list of natural wonders during the summer months here: the incredible display of the migratory swifts as they zoom in and around the red-tiled rooftops for hours on end. These unique and highly aerial birds, migrating from South Africa, eat, sleep and drink while in flight. They make a loud, high-pitched, chorus-like sound as they swoop acrobatically with magnificent grace across the morning and evening skies. A typical swift will fly four million miles in its lifetime, the equivalent of going to the moon and back eight times. They are a sight to behold.

introducing my family to Italy starting with...

no better place to start than...

We've never tasted anything so good!

bold flavors from only the freshest ingredients

Red Tile Roofs as far as the Eye Can See

Something To See Around Every Corner

View from a
12th Century Castle

A small hamlet in Piombino, Populonia is an ancient walled city that overlooks the Baratti Gulf with beautiful views of the island in the Tuscan Archipelago. After a morning at the beach, dine alfresco under ancient olive trees at La Taverna Di Populonia, followed by a stroll along the main street for some shopping in wonderful local artisan shops.

This local beachside town and vacation destination is a popular spot for water activities and dining. We ate at La Conchiglia, situated along a stretch of beach that extends eight miles along the Mediterranean sea. We were probably the only Americans—but with a little bit of Italian and lots of smiles, it was not difficult to navigate our way with the many locals enjoying their meals. We had a delicious lunch of fresh seafood while taking in the beautiful views of the islands in the Tuscan Archipelago.

Suvereto is home to many vineyards and wineries, most of which are open for tours and tastings all year round. We had the opportunity to take a late afternoon guided winery tour at Tenuta Casadei, a unique bio-integral wine-producing company that sits upon an expansive garden estate with vines surrounded by century-old trees, wild olives, maritime pines and picturesque hills. International grape varieties like petit verdot, cabernet sauvignon, muscat, syrah, mourvèdre, and grenache are grown here and used to make award-winning Suvereto DOCG red and white wines.

Dating back to before 1000, Suvereto is considered by some to be one of the most beautiful medieval villages in Italy and is located in the Maremma area of southern Tuscany. This village is a gem of ancient walls that protect its characteristic medieval streets, stone houses, historical buildings and churches. The rich landscape surrounding the area makes it ideal for growing cork oak trees, olive groves and vines. The name Suvereto, in fact, comes from sughero, which in Italian means cork oak.

As in much of Tuscany, Suvereto has many interesting historical sites, including the ruins of the ancient Rocca tower and the Suvereto Castle, built in the 10th century but taken over and heavily fortified by the Aldobrandeschi family. The Suvereto City Hall is in an impressive medieval building dating back to 1200. We dined in Suvereto in a courtyard directly next to the City Hall and were treated to a typical Tuscan meal of wild boar and local wines.

Also known as the Caribbean in Tuscany, the Gulf of Baratti is a patch of unspoiled nature between the Tyrrhenian and Ligurian seas, situated a stone’s throw from Piombino. Since we had visited one of the local beaches in Piombino earlier that day, we skipped the beach. Instead we drove to a lovely seaport harbor called Porto di Baratti, or Port of Baratti, located on the far left end of the bay. We enjoyed Italian-style seafood at a waterfront restaurant called La Pergola. With a terrace overlooking the harbor, the restaurant was a wonderful spot to watch the sky turn from day to night in a beautiful sunset.

An hour’s ferry ride from the mainland, Elba is the biggest island of the Tuscan Archipelago and the third largest in Italy after Sardinia and Sicily. The ferry ride was a great time to think about the island and imagine Napoleon exiled there, knowing that he saw all the same beauty that we were seeing. The island is filled with winding roads that climb mountains and hug high sea vistas. One spiaggia, or beach, destination of the many to explore on Elba is a hidden gem that few American tourists see called Fetovaia. This gorgeous beach has crystal-clear water and a stunning view. You can rent umbrellas, lounge chairs and head to the water. When we visited, many people were swimming, and we snorkeled the cove and enjoyed the natural beauty around us. It was a spectacular place and one that is worth experiencing.

Tuscany is filled with beautiful and picturesque drives on roads lined with wineries, grapes growing in vineyards, and olive trees. The real gem is the cypress-lined road leading to the village of Bolgheri.

Upon entering the walls of the village you pass the church—every village has one, and we suggest you visit them all as each is unique and filled with art and interesting architecture. Bolgheri is a quaint village with many shops featuring local artisans and goods and restaurants. We bought many gifts for friends and family, and every restaurant looked so enticing it was hard to choose where to eat. We tasted ribollita for the first time, a classic Tuscan soup that we will be making at home this fall and winter. At the top of the village is a spot to see the mountains and sea and snap some photos.

Before heading out to Rome, we ended our time in Campiglia Marittima at a lovely spa and resort called Calidario Terme Etrusche, one of several popular thermal springs located in the heart of the Etruscan coast. The alkaline waters here are rich in sulfates and have been a popular destination since Etruscan and Roman times.

Calidario Terme Etrusche is set on a peaceful hilltop just outside Venturina and features its own natural hot springs with waterfalls and a bathing area, as well as hotel rooms and dining. Our bodies soaked up some much needed relaxation after all the walking and excursions of the week. We swam in the natural waters and rejuvenated ourselves on our last night in Tuscany. Afterwards we ate at the on-site restaurant called Aquolina, which sits on the terrace overlooking the natural spring with a view framed in the classic green hills of the Tuscan coast. Our meals were delicious, made with seasonal, local fresh ingredients, and we sipped some of the many great wines from this region. All of us agreed that we wished we had come to this incredibly relaxing place sooner, as it was a most amazing all around experience. As we left, we visited the small church on premises that overlooked the spa under the Tuscan stars, and we were left with a wonderful memory and feeling as we headed back up the winding roads to Campiglia one last time.

Gulf of Baratti in Populonia

Al fresco dining on the streets of ...

Lunch under the olive trees

Heading to the beach in....

Sun and sand in beautiful...

A special night out at a
Michelin Star restaurant
in the historic center of Suverto....

A sampling of gourmet delicacies

The Gulf of Baratti

stunning views of the vineyards

committed to the environment & organic grapes

thermal baths in the spa

guests returning from the spa

How to Stay Healthy Over the Holidays