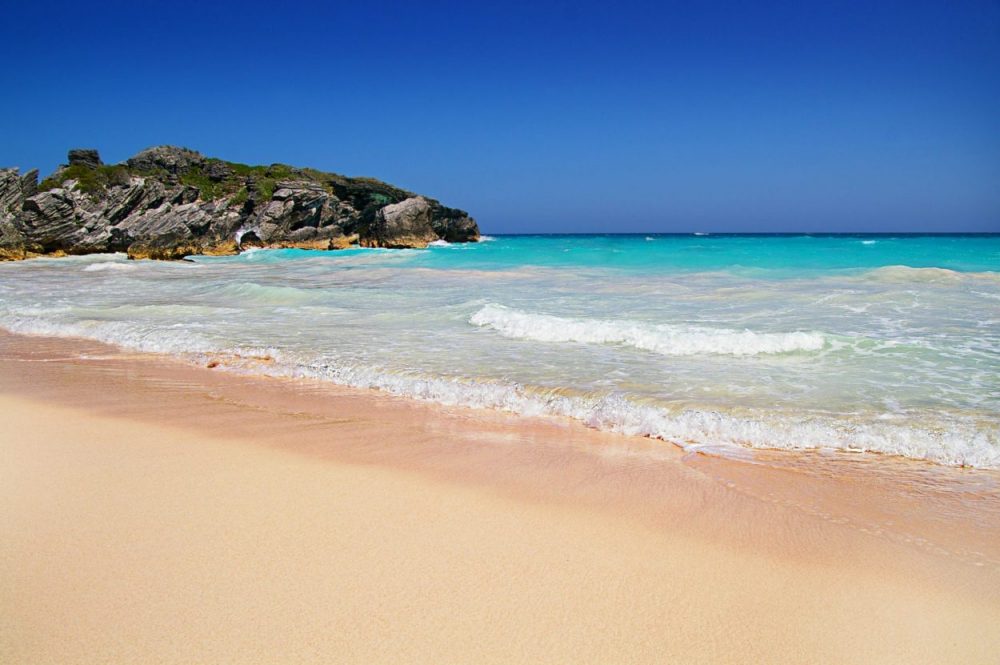 The island of Bermuda holds a unique and special place in this writer’s heart— almost 60 years ago in 1958 I enjoyed my first visit there, on my honeymoon, and my parents had honeymooned there in 1929. Having grown up with those lovely hand-colored photos of this beautiful place, it was an obvious choice for my husband and I. Not to say Bermuda is only for newlyweds—far from it, as this article will attempt to emphasize.

Many people are hazy as to the actual geographical location of Bermuda and mistakenly place it in the Caribbean. In reality, Bermuda is an archipelago consisting of 181 small land masses and rocks located in the Atlantic Ocean 600 miles southeast of the coast of the Carolina’s. The seven largest islands are arranged in the shape of a giant fishhook with bridges and causeways linking them so that many people think of Bermuda as a contiguous island. One of the bridges is called “the smallest drawbridge in the world”; merely a few feet long with a hand operated section that lifts to allow the mast of a sailboat pass through. The total land mass covers a mere 21 square miles.

It is unclear as to the exact discovery date of Bermuda but history has attributed it to Juan de Bermudez, who sailed by in 1503. The first settlement did not occur until 1609 and consisted of a group of colonists on their way to Virginia and blown off course. Most of these early settlers later moved on to Virginia, having remained long enough to repair their ship but two were said to remain. In 1612 more English settlers arrived and a true outpost was established. Four years later the first slaves were brought in, mainly from Africa but also some Indians from North America and subsequently Scottish and Irish prisoners. Bermuda has a long colorful history, being labeled at one point, “the Isle of Devils” because of the reefs surrounding which wrecked many a ship and allowed the residents to get rich on the salvage gathered in from the wrecks. After Gibbs Lighthouse was erected this profitable enterprise ended. Still standing, the lighthouse is the oldest cast-iron lighthouse in the world. It is a must visit site perched high on a hill and allowing those who climb to the top fabulous panoramic views spread out beyond.

Bermuda became an official British colony and received the right to self-government in 1684 and remains under the flag of Great Britain to the present day. It is a beautiful and very gracious island obviously steeped in British traditions combined with its own particular identity. A lot of visitors return year after year, a fact evidenced by some hotels proudly posting the names of guests combined with the number of their visits. Because Bermuda is such a short flight from our East coast, long weekend visits are very possible and one of the reasons for so many returning travelers.

Pastel colored houses with white roofs dot the green hillsides and soft pink sand beaches edge the turquoise waters; a watercolor painting come to life. But Bermuda has much more to offer the visitor than picturesque scenery. Tennis and golf, cycling-both pedal and motorbikes, horseback riding, scuba and snorkeling, jogging and hiking and bird watching. Bermuda has long been a sailor’s heaven with the world class Newport R.I. to Bermuda yacht race garnering entrants from around the globe. The Bermudian love of sailing can be seen in all the boats large and small anchored in the large and small harbors surrounding the island.

Exploring Bermuda means never being far from breathtaking views of sea and shore since the island is only one and a half miles wide at its widest points. Getting around is quite easy in spite of fact that automobiles can only be operated by residents. There are extensive bus services; moped and bike rentals and a small ferry network that connects different points, plus providing and the views of Bermuda from the water.

A neat thing to do is renting a moped and plotting out explorations combining both modes of transportation. The bikes are carried on these ferries for a small additional charge. As delightful as mopeds are however, visitors are constantly warned to use caution operating them, as the speed limits are posted for a good reason–the roads are very narrow with many stone walls. There are many tales of visitors having accidents from excessive speed and failure to remember that Bermuda follows the British model of traveling on the opposite side from the US, and this fact takes getting used to when going into round-a-bouts! Happily, the residents driving are very used to the tourists on the roads.

For the less adventurous, buses do run frequently and provide a venue to ride along with many friendly and hospitable Bermudians. If one happens to be on the bus when the children are traveling to or from school in their crisp uniforms it is a delightful experience and becomes a precious memory.

Bermuda once had a small picturesque railway running the length of the island. Visitors particularly loved riding in the wicker chairs, etc., but WWII brought heavy military use and the wear and tear caused the need for much costly repair. The government decided this was uneconomic to repair and ultimately the rolling stock was sold to Guyana, and the tracks ripped up.

This abandoned railroad bed has now been dedicated as The Railway Trail and there are 18 miles through island history with spectacular views. The trail can only be used by pedal cyclists or hikers so it is truly peaceful.

There are 3 main roads traversing the east-west distances, labeled North and South Shore Roads, and a Middle Road. Smaller roads and lanes branch off from these providing much to explore but preventing one from getting horribly lost.

Bermuda is divided into 9 parishes, but I will highlight two; Sandys and St. George’s. Sandys, pronounced “sands”, is located on the western end of the island, has quiet lands and bays, sheltered beaches, and a deluxe cottage colony hotel named Cambridge Beaches. The tiny village of Somerset has gift shops and a traditional tea café. It is also home to Springfield, an old plantation house belonging to the Bermuda National Trust.

This parish is also home of the old Royal Navel Dock Yard, located on the Ireland Island, and which is meticulously restored. It houses the Royal Maritime Museum, a shopping complex and an art center. Jazz Festivals and concerts are also held in this area. Most of the big cruise ships dock here, so it is not unusual to see more than one in port at a time.

St. George’s parish is located at the exact opposite end of Bermuda from Sandys and is home to the town of St. George, designated a UNESCO World Heritage site. This was the area where the settlement group from Britain landed and founded this town. It is the oldest, continuously inhabited settlement outside of the British Isles.

Cobblestoned King’s Square is the main town center of St. Georges where you can find the oldest bank of Bermuda, Butterfield Bank. It was originally built in 1776 and used by the troops during the American Revolution. Just outside this building, you will see a replica of stocks and pillory. These were used during the British Colonial days in the 18th century, for punishing those who committed petty crimes like drunkenness. Visitors cannot resist taking photos with their heads and hands inserted through the holes.

It is interesting to note that these stocks, as well as the interior of the nearby St. Peter’s Church, and many other buildings, are constructed out of cedar wood. In fact, when buildings are entered the aroma of cedar is quite strong. This is due to the fact that Bermuda hillsides were covered with cedar trees and the settlers would use this for trim and furnishings while other areas of the world would use their own native woods. Unfortunately, a blight wiped out all of these trees at the end of WWII and gradually, even all the wood from the dead trees, was utilized and had disappeared by the later 1960’s. Australian Casuarina trees were planted as they are green and quick growing, but their wood cannot be used as cedar wood was.

St. Peter’s Church referenced is the oldest Anglican church in the western hemisphere with the original structure built in 1617. The current structure dates from 1713. Bermudians have been worshiping and marrying there ever since. It is also the site for the more modern “destination” weddings that have become popular. One of the church’s unique features is a rare three-tiered pulpit made of cedar of course.

The quaint town is surrounded by old forts—Fort St. Catherine, the best known. A colorful ceremony each April, St. George’s Masonic Lodge pays the rent of one peppercorn for the use of the State House. This Peppercorn Ceremony reflects the British traditions that have delighted visitors for centuries.

One of Bermuda’s most outstanding feature that has helped to lure many a visitor, the dozens of gorgeous soft pink sand beaches! The most celebrated beach is called Horseshoe Bay. Well named as it is a very wide sweeping beach located on the south shore. This is a very popular beach, but so large it can accommodate many and rarely feels too crowded. Bermudians swim mainly between May and October, when the water temperature reaches up into the 80’s and beyond, but visitors often swim year round. Even if the water temps don’t lure you in during the “off-season” the beauty of this beach on a mild day attracts beach lovers to this grand strand.

A mention must also be made of the truly world class golf courses that dot the island, with special mention of the famed Mid-Ocean Club which has played host to Pro Golf tournaments. Bright green tees edging the sparkling turquoise waters places a burden on golfers to keep their mind on their game!

Food and cuisine always play a most important part of any vacation and visitors to Bermuda will find an interesting culinary tradition. The flavors blend the ethnic makeup of the population in a unique way. Fish is a staple of course with many dishes featuring the widely available Wahoo and Rockfish. Chowder made with Rockfish is found on many restaurant menus. On most dining tables a bottle of locally made sherry-pepper vinegar stands waiting to be sprinkled into the Rockfish chowder. The bottles of vinegar also can be purchased as a wonderful souvenir of a visit to the island. Famous cocktails include rum swizzles and a tall drink called dark and stormy featuring local Gosling black rum and ginger beer.

Bermuda has remained a unique island paradise with the scents of oleander, frangipani, bougainvillea and hibiscus, mingling with the clean salt air. These flowers bloom at various times during the year and continually entice visitors to return. The natural beauty and charm, coupled with the close proximity to New York, make it a desirable destination to visit over and over again.

While visiting Bermuda long ago in 1958, a local steel band was playing a song entitled “Bermuda is Still Paradise”, and I can honestly say that this song title still rings true today.