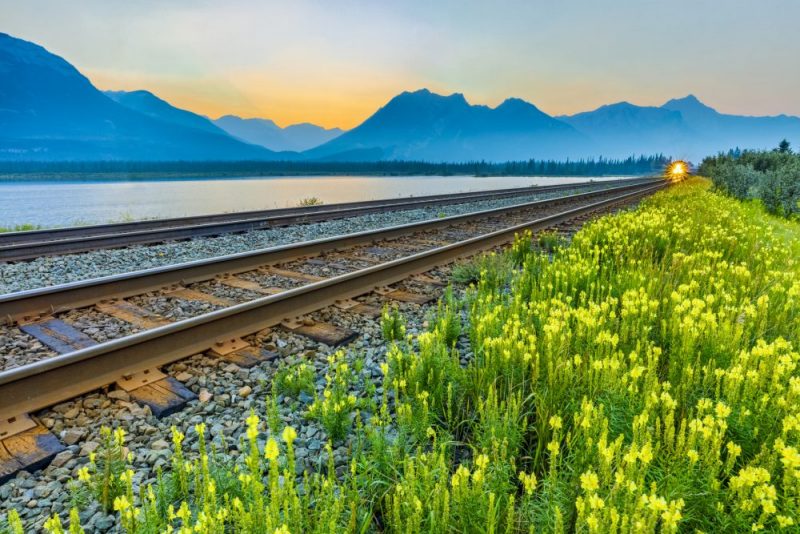 There is no arguing that the fastest way to go between places in the United States is to travel by plane. But if time is not the most important factor in your travel, a much more relaxed mode of railway travel should be seriously considered.

Most of us live in the vicinity of the stunning Rensselaer-Albany Rail Station. This station is one of the busiest in the United States with trains heading north to Canada, west to Chicago and south to New York City and beyond. Comparing the atmosphere between the airport and rail terminals one sees quite a difference. While both revolve around timetables, the atmosphere is quite dissimilar. There is a certain tension involved with air travel that is missing with travel by train. One does not have to endure luggage inspection; metal detectors, body scans and shoe and belt removals for rail travel versus air. Train travel is just so much more relaxed.

The Rennselaer train station has huge windows overlooking the tracks enabling to view close up the arriving and departing trains while simultaneously hearing them announced over the loudspeakers. Passengers descend to the boarding platforms via escalator and elevator and step right on to the trains, avoiding the jet way tunnels followed by squeezing in to the plane aisle, then fighting for the limited overhead storage space and then finding ones narrow cramped seat. Compare this to wide aisles, comfortable seats with foot rests configured two across. Overhead storage racks are roomy and one almost never experiences the frantic competition for space one does on a plane.

Overnight train routes have other types of accommodations which are available on most long distance routes. East of Chicago the train cars are one level and are called view liners. West of Chicago the trains run two level super-liner equipment. Both types of trains include bedrooms arranged in various configurations offering private and public lavatories and showers.

To help you plan a long-distance train trip I am choosing 5 of the most popular and worthwhile routes. Unfortunately, for us Easterners, 4 out of the 5 listed do not originate in our area due to fact that the super liner rail cars cannot travel on the existing track structure and bridges, but of course connections to these trains are easily arranged.

1) Coast Starlight travels from Portland/Seattle to Los Angeles in 36 hours. Travelers come from all over the world to experience the beautiful Pacific Coast. This most popular and stunning route carries nearly 500,000 passengers a year! The Coast Starlight passes waterfalls, lush forests, the snowy Cascade Mountains and the Puget Sound?along with long stretches of the Pacific shoreline and perhaps catching glimpses of playing sea otters and passing pods of whales.

2) Empire Builder travels from Chicago to Portland/Seattle in 46 hours. This train travels portions of the Lewis and Clark Trail from America’s heartland to the Pacific Northwest and is a super way to see the United States, passing along the southern boundary of Glacier National Park in the magnificent Rocky Mountains. One is truly seeing America the Beautiful on this route!

3) California Zephyr travels an historic route from Chicago to San Francisco in 51 hours 20 minutes. Fortune seekers traveled as they rode the first transcontinental railroad which was completed in 1869. They headed to California hoping to strike it rich. The train passes abandoned gold mines and ghost towns along with former stagecoach stops that were places the original railroad visited. Rocky Mountain tunnels carry you across the Continental Divide while stands of Cottonwood and Aspen trees dot the steep cliffs of canyons and the Colorado River. This journey ends with a heart-stopping sight of the Golden Gate Bridge.

4) Southwest Chief travels from Chicago to Los Angeles in 40 hours. This train route carried the nation’s first all-Pullman sleeping car train dubbed the Train of the Stars for the celebrity passengers traveling in the late 1930’s. The film “Some Like it Hot” provides a glimpse of what these trains were like. Today the route covers some of America’s most iconic sights including the Santa Fe Trail, Sedona’s red cliffs and the Grand Canyon along with the Continental Divide and picturesque pueblo settlements.

5) The Adirondack is perfectly named as it travels north from NYC along the majestic Hudson. Heading out of Rensselaer/Albany station it passes Lake George and Lake Champlain arriving in Montreal in 12 hours.

Passengers must carry necessary documentation, i.e. passports or other acceptable documents required by US and Canadian authorities if one is traveling the entire route. This trip is particularly scenic during fall foliage time and Amtrak usually adds a dome car for viewing the color splashed Adirondack and Green Mountains.

The phrase ‘romance of the rails’ conjures the time in our past when taking a train trip was an experience cloaked in glamour and luxury. Made to order meals were prepared right on your train, served on china plates, with silverware and linen tablecloths. The proliferation of the Interstate Highway system coupled with increased air travel and of course America’s love of the automobile in the 1950’s almost dealt a death blow to passenger train travel. Saner minds did prevail however, and the failing private passenger train companies were combined into a quasi-governmental organization known as AMTRAK responsible for operating the passenger carrying cars and the freight lines were combined into CONRAIL. The downside of this arrangement is that CONRAIL is responsible for maintenance of the rail tracks and operates privately. Many of the bothersome passenger train delays today are caused by the tracks not being properly and promptly repaired.

It is safe to say train travel does still exist in the United States and there are wonderful long-distance trains still operating. AMTRAK stats reveal healthy usage seeming to grow each year. Sleeping accommodations are often booked far in advance and are in high demand in certain seasons.

One can select an AMTRAK route that will carry you on a variety of routes, while providing an amazingly enjoyable experience! You will not be stuck in the middle of a highway and you won’t be looking down on the landscape through clouds at 30,000 ft.. From a train window you’ll get a panoramic view of the American countryside as you roll through it.

Unless you are utterly bored by spectacular scenery, the special trains listed here will not disappoint. Adding to that is the chance to meet an eclectic mix of fellow passengers. Train travel provides lounge cars and dining cars often in the seat next to you or across the aisle. The relaxed atmosphere of train travel, versus the inherent tension of being crammed in a tight space on a plane, seems to bring out the best in people.